* Readers of DDoT will notice i am focusing more on the collapse of the economy than PMC's and
Terrorism. I think the crisis unfolding will overshadow the 9/11 era. The real terror is financial terror- the prospect of no job, no food and a collapse of our way of life. 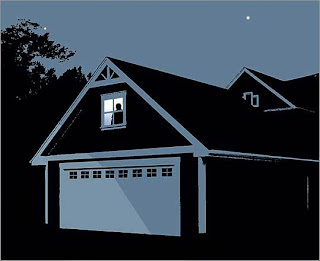 Depression 2009: What would it look like?Lines at the ER, a television boom, emptying suburbs. A catastrophic economic downturn would feel nothing like the last one
OVER THE PAST few months, Americans have been hearing the word "depression" with unfamiliar and alarming regularity. The financial crisis tearing through Wall Street is routinely described as the worst since the Great Depression, and the recession into which we are sinking looks deep enough, financial commentators warn, that a few poor policy decisions could put us in a depression of our own.

It's a frightening possibility, but also in many ways an abstraction. The country has gone so long without a depression that it's hard to know what it would be like to live through (cont..)
http://www.boston.com/bostonglobe/ideas/articles/2008/11/16/depression_2009_what_would_it_look_like/?page=2


Please see:
America’s Economic Crisis Is Beyond The Reach of Traditional Solutions
http://www.vdare.com/roberts/081112_financial.htm
Worse Than the Great Depression?
http://globalresearch.ca/index.php?context=va&aid=11001
http://www.economyincrisis.org/

Sen. Feinstein might head secretive intelligence panel
http://www.miamiherald.com/news/politics/AP/story/775048.html
WASHINGTON -- Democratic Sen. Dianne Feinstein of California will find both spotlight and shadows if she becomes the chairman of the Senate Select Committee on Intelligence.
Feinstein stands to become the first woman, and the first Californian, to lead the 15-member panel since it was established in 1976. She's the front-runner for the job, due to a cascade of other Senate leadership changes that will become final this week.
Posted by NXNGRG at 7:00 PM

Ya know it's odd, about 6 months ago or so, and I had this realization that if there was going to be another terrorist act committed in this country, that it would be economic terrorism. It is hard to explain how I had this realization. I guess it was a combination of what was going on in the news and some old movies I had watched on those classic movie channels, particularly one about the Roman Empire.

Economic terrorism is a sure fire way to attack a country and really hurt it, because you are basically hitting it from "the inside", like a disease on the human body. I think you may get what I mean.

Anyway, I'm glad to see you are focusing on other issues at hand and not just focusing on 9/11 exclusively. In a way we may have to just chalk that one up like all the other stuff in the past that has happened and has yet to be resolved. But don't worry there are plenty of people out there trying to get the word out and trying to get the truth known.

We need to keep track of everything going on right now, "Master the possibilities" you might say, because I'm sure the elite are doing the same thing unbeknownst to most of the population of the world.

At least if something does happen we can point back to articles on blogs like yours and say "There is your proof". It almost like we are collecting evidence for a future trial that hasn't happened yet, God's Judgment if you will.

Keep up the good work dude.