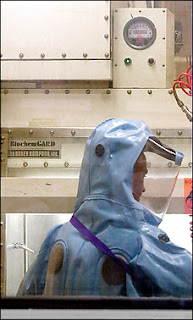 Seven years after the 2001 anthrax attacks, a congressionally ordered study finds a growing threat of biological terrorism and calls for aggressive defenses on par with those used to prevent a terrorist nuclear detonation.
Due for release next week, a draft of the study warns that future bioterrorists may use new technology to make synthetic versions of killers such as Ebola, or genetically modified germs designed to resist ordinary vaccines and antibiotics.
The bipartisan report faults the Bush administration for devoting insufficient resources to prevent an attack and says U.S. policies have at times impeded international biodefense efforts while promoting the rapid growth of a network of domestic laboratories possessing the world's most dangerous pathogens.
The number of such "high-containment" labs in the United States has tripled since 2001, yet U.S. officials have not implemented adequate safeguards to prevent deadly germs from being stolen or accidentally released, it says. "The rapid growth in the number of such labs in recent years has created new safety and security risks which must be managed," the draft report states.

Shields up! How nanotechnology can protect satellites from energy weapons
http://www.nanowerk.com/spotlight/spotid=8308.php 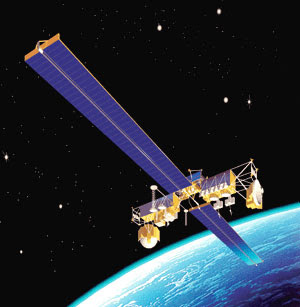 (Nanowerk Spotlight) When the U.S. military talks about space superiority it defines this as the "degree of control necessary to employ, maneuver, and engage space forces while denying the same capability to an adversary". Although 'space forces' has a Star Wars ring to it, the term basically refers to satellites and these satellites – at least as far as unclassified information goes – do not carry weapons (yet); although the public website of the U.S. Air Force Space Command in listing its capabilities mentions the ability to "conduct defensive and offensive counterspace operations, and space environment assessments". The main functions of the military's space capabilities today are information related – weather, communications, surveillance, reconnaissance, navigation and missile warning capabilities – and has become critical to many military operations. As other military powers build up their space programs, defensive and offensive space capabilities become more of an issue for war planers – something they call "counterspace" activities.
"The paper states that several nations, including the U.S., Russia and China, already have either built or are developing the technology to construct ground-based directed energy weapons."
Tactical Applications of Directed Energy Weapons are at Technical Readiness for Battlefield Application. http://www.pr-inside.com/tactical-applications-of-directed-energy-r939619.htm
2008-11-27 16:03:49 - A panel of experts will meet to discuss the application of Directed Energy Weapons to the battlefield.
Tactical applications of Directed Energy Weapons are at Technical Readiness Levels (TRL's) for conversion to the battlefield. In addition, exciting advances in technologies being developed for Strategic applications for Directed Energy (DE), such as anti-Surface to Air Missiles (SAMs) lasers, are reaching critical stages.Paul McLeary writing in Aviation Week
last month reported that 'The U.S. government allotted $25 million in
this past summer's war supplemental funding bill for five (-Silent Guardian ADS-)
systems.' Continued investment
in research projects for DE applications, from anti-SAM lasers to crowd control systems such as the Active Denial System, ensures that this is the hottest area of development in weapons systems for the 21st century. 'It is the optimum time for militaries to discuss the practical aspects of using this technology in theatre, in the months before it goes into active service.' stressed Alastair Lewis, Event Director at Defence IQ......

Is China spreading 'Manchurian chips?'
"Trojan Horse on a chip" alleged
http://computerworld.co.nz/news.nsf/scrt/2EB64110D830150ACC25750E0077A87F
We don't often discuss conspiracy theories, but this technology-focused doozy needs to be debunked before it spreads any further. It's Daily Artisan's reprint of an essay written by former FBI "spy" Robert Eringer for the Santa Barbara News-Press.
In it, Eringer alleges that the Chinese government has taken advantage of the fact that virtually every computer on the market has parts from China and has fitted each component with a "Trojan Horse on a chip," or a "Manchurian chip."Eringer claims that while the spies-on-a-chip are not currently activated, the Chinese government can activate them at will, effectively gathering information on every US citizen with a PC as well as every US government and military computer system. To back up his story, he cites a classified DARPA report and quotes unnamed intelligence officials and industry experts, including one former intelligence officer who allegedly told him "it's the hottest topic concerning the FBI and the Pentagon"....

The suggestion that the Chinese have somehow managed to outwit multiple levels of industry and government-sponsored oversight to install and remotely activate "Manchurian chips" may appeal to the tin-foil hat crowd, but it should not be taken seriously. There is definitely a concern about the Chinese government gaining access to sensitive data on US networks, but to date, every compromised system has been due to holes in the software or on the networks, not the hardware.-->

India's 9/11. Who was Behind the Mumbai Attacks?
Washington is Fostering Political Divisions between India and Pakistan
http://globalresearch.ca/index.php?context=va&aid=11217

Obama Who Sent You?
http://dotconnectoruk.blogspot.com/2008/11/obama-who-sent-you.html

* Obama is a robot that was assembled to read scripts to make the same old crap more palatable to the public.
Posted by NXNGRG at 6:20 PM

Wonderful blog. I liked it.