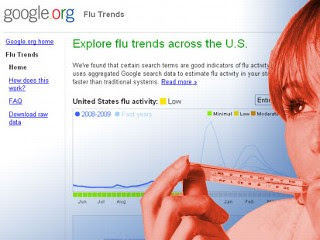 GOOGLE will launch a new tool that will help federal officials "track sickness"."Flu Trends" uses search terms that people put into the web giant to figure out where influenza is heating up, and will notify the Centers for Disease Control and Prevention in real time!GOOGLE, continuing to work closely with government, claims it would keep individual user data confidential: "GOOGLE FLU TRENDS can never be used to identify individual users because we rely on anonymized, aggregated counts of how often certain search queries occur each week." Engineers will capture keywords and phrases related to the flu, including thermometer, flu symptoms, muscle aches, chest congestion and others. Dr. Lyn Finelli, chief of influenza surveillance at CDC: "One thing we found last year when we validated this model is it tended to predict surveillance data. The data are really, really timely. They were able to tell us on a day-to-day basis the relative direction of flu activity for a given area. They were about a week ahead of us. They could be used... as early warning signal for flu activity."

County To Take Part In Major Earthquake Drill (CA)
http://www.10news.com/news/17948375/detail.html?rss=sand&psp=news
SAN DIEGO -- More than 5 million Southern Californians, including nearly a million in San Diego and Riverside counties, are scheduled to participate Thursday in the largest earthquake drill in U.S. history, it was reported Monday.
At 10 a.m. Thursday, about 405,000 people in San Diego County and about 565,000 in Riverside County will drop to the floor at schools, homes and offices for 1 1/2 minutes in an exercise that envisions a 7.8-magnitude quake centered near the Salton Sea, The North County Times reported.
Sprint Demonstrates How Southern California Citizens Can Be More Prepared During State-Sponsored Earthquake Drill
http://www.centredaily.com/business/technology/story/956755.html

KBR wins Army Corps contract
http://www.bizjournals.com/houston/stories/2008/11/10/daily13.html
KBR Inc. has been awarded a $75 million disaster relief contract by the U.S. Army Corps of Engineers for emergency power.
The Houston-based engineering company will be supplying the power to the Western region of the United States.
The five-year contract was created by the Army to respond immediately to power emergencies caused by natural or manmade disasters.

Homeland Security now spying on Americans (this just in! of course DHS is spying on us, they need to know who is aware of the crimes the elites are committing)http://www.americanchronicle.com/articles/81037 Using Unmanned Aerial Vehicles (UAV´s) and Space-Based Domestic Spying Surveillance technology the U.S. Government is now watching American citizens under the guise of disaster management and controlling the U.S. Mexican border. The Reaper/Predator B UAV´s robotic killing machines are currently in operation with the USAF, US Navy and the Royal Air Force. In addition non military users of the Predator B include: NASA and Homeland security though the US Customs and Border Protection agencies. The Department of Homeland Security´s (DHS) space-based domestic spy program run by that agency´s National Applications Office (NAO) is now in full operation. Indeed during Hurricane Ike, U.S. Customs and Border Protection for the first time flew the Predator B unmanned aerial vehicle in "support of the Federal Emergency Management Agency´s relief efforts," the insider tech publication reported. (cont..)