SILVER SPRING, Md., Nov. 25 (UPI) -- The U.S. Defense Department has contracted SimQuest to develop a training tool simulating an influenza pandemic outbreak.
The Office of the Secretary of Defense awarded Maryland-based SimQuest a phase II contract as part of an effort to establish emergency preparedness models to address the potential threat of an influenza pandemic outbreak in the United States. Under the phase II deal, SimQuest will develop a training tool simulating the spread of influenza.
SimQuest will also develop training models with various pandemic scenarios for military applications because of the likely involvement of the U.S. military during a pandemic.
Pentagon Should Battle Pirates and Terrorists with Laser Technology
http://www.heritage.org/Research/HomelandSecurity/wm2144.cfm
Directed Energy Weapons, particularly those powered by lasers, have long been the stuff of science fiction. Due to recent innovations in commercial solid-state lasers and their adaptation to military uses, potential and immediate national security applications for these weapons are apparent. (cont...)
U.S. Army to Equip National Guard Unit With Future Combat System Aerial
Robots http://news.yahoo.com/s/usnw/20081125/pl_usnw/u_s__army_to_equip_national_guard_unit_with_future_combat_system_aerial_robots
Anti-terror exercise underway in Sydney
http://news.ninemsn.com.au/article.aspx?id=671589 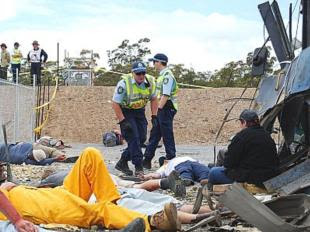 Real explosives will blow up real buses and real trains in Sydney this week.
But there won't be any mock terrorists or fake casualties involved in Sudden Impact, a counter terrorism exercise at Holsworthy army base in southwestern Sydney.
The two-day operation, on Tuesday and Wednesday, is designed to test state and national capabilities to respond to a terrorist attack.
Hundreds of personnel are involved in the simulated attack on a public transport system

LGS Supports JFCOM in International Military Exercise Focusing on Ensuring the Defense of the Panama Canal http://br.sys-con.com/node/760087
LGS, a subsidiary of Alcatel-Lucent (NYSE: ALU) dedicated to serving the U.S. government community announced today that it was a part of the Fuerzas Aliadas (FA) PANAMAX 2008 multinational training exercise that involved more than 20 nations.
The purpose of the exercise, which took place in August, is to help ensure the security of the Panama Canal. It was cosponsored by the U.S. Southern Command and the government of Panama and included more than 30 vessels, a dozen aircraft and 7,000 personnel
Israel Electric Company to hold nationwide war drill Wednesday
http://www.jpost.com/servlet/Satellite?cid=1226404831776&pagename=JPost/JPArticle/ShowFull
The Israel Electric Company (IEC) will hold a comprehensive nationwide drill on Wednesday to mimic the situation during a regional war.
Workers will hold exercises in preparation for various scenarios including a direct hit on electricity infrastructure and a terror attack on an electric facility.
IEC Director General Amos Lasker said the drill was vital in preparing for various security scenarios and principally for bolstering professional cooperation between different IEC departments and officials.
"The electric company holds a large-scale drill like this once a year to assess our crisis management and operates in order to lessen the possible risks in cases of emergency," said Lasker, adding that during wars, the IEC had always operated to the best of its ability in order to minimize damage caused by a strike on electric infrastructure.
Russia's Medvedev's Tough Guy Act
CBS News: New Russian President Seems To Be Reviving Adversarial Relations
With The U.S. http://www.cbsnews.com/stories/2008/11/24/world/main4631526.shtml?tag=topStory;topStoryHeadline
Russia, Venezuela warships to hold live firing drills on Dec.1
http://en.rian.ru/russia/20081125/118527860.html
Raytheon missile hits target (FCS)
http://www.bizjournals.com/boston/stories/2008/11/24/daily14.html?ana=from_rss
Gates 'to stay as Pentagon chief'
http://news.bbc.co.uk/2/hi/americas/7749237.stm
Posted by NXNGRG at 4:54 PM