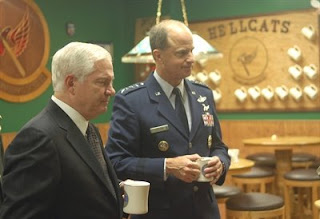 LOS ANGELES — The military’s top strategic officer warned Friday that terrorists or other nations may try to take advantage of the transition period between the administrations of President George W. Bush and President-elect Barack Obama to strike or otherwise threaten the U.S., but he said the Defense Department is being vigilant against that possibility.
“At every transition, there comes risk,” said Air Force Gen. Kevin Chilton, commander of U.S. Strategic Command, speaking at the Air Force Association’s Global Warfare Symposium in Los Angeles. “It’s not a risk of who gets elected; it’s just a risk of change [and] how our adversaries around the world look at our vulnerability during that time period.”
Obama takes office on Jan. 20, but it could take months for him to assemble his entire team and for them to hit their stride. Rumors have swirled recently around Washington that Obama might retain Defense Secretary Robert Gates for a time to ensure continuity in national security issues.
Chilton, one of the military’s 10 combatant commanders, pointed to several examples of international incidents or attacks against the U.S. that have occurred shortly after a presidential transition: President John F. Kennedy’s confrontation with the Soviet Union regarding Cuba that began in 1961, the first World Trade Center bombing and the conflict in Mogadishu, Somalia, shortly after President Bill Clinton took office in 1993, and the Sept. 11 attacks under Bush in 2001.

Microsoft to aid in war on terror, builds software for DHS
http://arstechnica.com/news.ars/post/20081121-microsoft-to-aid-in-war-on-terror-builds-software-for-dhs.html 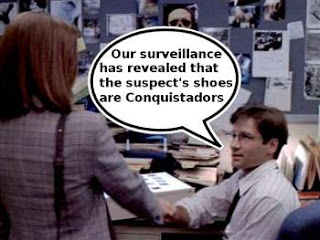 Microsoft and GIS vendor ESRI have announced that they are constructing a suite of collaboration tools for intelligence gathering and processing, intended for deployment at the Department of Homeland Security's national fusion centers. The software is built on top of Microsoft's SharePoint server platform and ESRI's ArcGIS Advanced Enterprise server.
The software will include a "situational awareness portal" with location-based RSS feeds and XML map overlay data. The information that is managed by the system will be made accessible to intelligence analysts through SharePoint. Microsoft says that the framework will be extensible and can be customized to meet additional, unforeseen needs. The bundle also includes terabytes of prerendered satellite imagery that can be used with mapping software. Microsoft plans to expand the scope of the system and use its components to provide a broader and more comprehensive technology solution for security applications.
The fusion center concept was conceived by the 9/11 Commission as part of a strategy that would streamline communication and intelligence sharing among various federal intelligence agencies and state law enforcement. The fusion centers, which are housed in high-security facilities across the country, provide government officials with a venue to collaborate on collection, analysis, and distribution of sensitive intelligence information.
Although the original function of the centers was to empower counterterrorism activity, the mandate has broadened to encompass virtually any perceived threat and the centers themselves are operated with minimal oversight and virtually no public scrutiny. The federal government has pushed aggressively to encourage passage of state laws that would block meaningful oversight of fusion centers in a variety of ways, including making their databases exempt from FOIA requests. (cont..)
Sounding the Nuclear Alarm
The U.S. will not have a credible arsenal unless Washington acts soon to replace aging warheads.
http://online.wsj.com/article/SB122731227702749413.html
Posted by NXNGRG at 7:09 AM