The selection of Obama as the 44th President of the U.S.
was not met with any jubilation from me. Yes I know it's historic to have a black man in the White House. Yes I know that Bush is finally gone. What makes me deeply depressed is that with Obama taking office, all the crimes of the Bush junta will get a pass and the slate wiped clean by the treasonous complicit Democrats.
What about the mass murder of 3'000 Americans by our own military apparatus? Justice will not be served.The Patriot Act reversed? No chance. Wars ended? No dice. Will Obama reverse any of the crimes of the last 8 years?
I see a broader war with Russia and China, an economy doomed to collapse, and a general false
sense of ease among the masses since Bush is gone. Activism will remain only for those who never drank the Obama kool aid.
We know the power structure would never let real change to occur, other than a cosmetic one. The criminals that have destroyed our country are still at large and will remain so. As long as we still have the Pentagon system (replete with the 9/11 criminals) America is not a free country. Dark dark days may be ahead..... 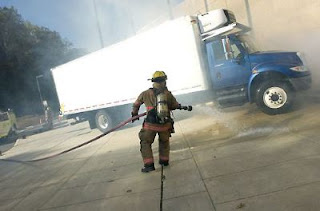 Bethesda drill tests emergency resources
A firefighter sprays water on a simulated fire during a drill. The Oct. 30 drill simulated a terrorist attack involving Sarin nerve gas and an improvised explosive device. It was intended to test the readiness of Bethesda emergency agencies and facilities
Hundreds of emergency personnel descended on the National Naval Medical Center last week trying to save 76 victims of a terrorist attack. But Suzanne Patterson just tried to make them look as gruesome as possible.
Patterson was the special effects artist responsible for the "blood and guts" at the Bethesda Hospitals' Emergency Preparedness Drill on Oct. 30, which simulated a Sarin gas and bomb attack outside Navy Med's Uniformed Services University to test the readiness of local, federal and military personnel. Her company, Military Moulage Combat Injury Simulation, has worked for the New York City Fire Department, the Pentagon, and other government and military agencies.
To create the victims' protruding bowels, third-degree burns and imbedded bits of shrapnel, the Emmy Award-winning Patterson utilized a wide variety of materials, from silicon to a bubbling Alka Seltzer tablet that mimicked a "sucking" chest wound. Gelatin and wax were used to simulate other deep wounds http://www.gazette.net/stories/11052008/nortnew215813_32477.shtml 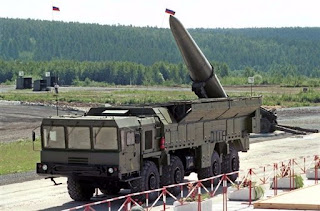 Russia will place short-range missile systems on the EU's eastern border to counter planned US missile defence installations in Eastern Europe, President Dmitry Medvedev said on Wednesday.
"Iskander missile systems will be deployed in the Kaliningrad region to neutralise the missile defence system," Medvedev said.
"There will also be radio-electronic neutralisation of the new US missile defence installations from the Kaliningrad region," he added.
Kaliningrad is a Russian exclave with a large military base that is wedged between Poland and Lithuania on the Baltic Sea coastline.
The Iskander are short-range missiles that use conventional warheads with a range of up to 400 kilometres (248 miles). Medvedev did not give any details on the type of scrambling devices that Russia would deploy in Kaliningrad.
The United States is pursuing plans to build a radar base in the Czec Republic and install interceptor missiles in Poland to counter what it describes as a missile threat from "rogue states" such as Iran.

Redondo Beach, CA — Northrop Grumman Corporation has been chosen to develop single-frequency fiber amplifiers for the new Revolution in Fiber Lasers (RIFL) program by the Defense Advanced Research Projects Agency (DARPA).
The RIFL program takes a similar approach to maturing fiber laser technology as Northrop Grumman demonstrated for solid-state lasers through support from U.S. military services and government agencies — by designing the building blocks needed to combine laser beams that can be scaled to a weapons-class power level while maintaining good beam quality.

Really great blog! We all know 9-11 was set-up by the U.S. Government.

Please review our website at your earliest convenience. Any feedback would be greatly appreciated.