* Monday Daily Dose of Terror will have an election scam special on why I don't bother voting. 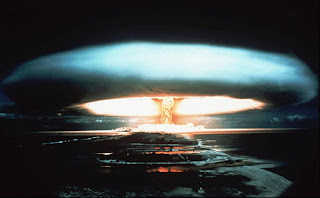 In a remarkable speech on nuclear policy delivered October 28 at the Carnegie Endowment for International Peace (CEIP), US Defense Secretary Robert Gates painted a dire portrait of international affairs and argued that Washington should expand the doctrine of pre-emptive war formulated by the Bush administration to include possible nuclear strikes.
It is widely rumored that, in the likely event that Democrat Barack Obama wins next week's US presidential election, Obama will keep Gates as defense secretary. Gates' speech, given in the waning days of the Bush presidency, has the character of a policy declaration of the next US administration. (cont...)


"A Second 9/11": An Integral Part of US Military Doctrine
http://globalresearch.ca/index.php?context=va&aid=10767


World Faces Growing Risk Of War
http://www.breitbart.com/article.php?id=081031180559.hq1yll01&show_article=1
The world faces a growing risk of conflict over the next 20 to 30 years amid an unprecedented transfer of wealth and power from West to East, according to the US intelligence chief..

Russia in 'muscle-flexing' war games
http://www.news.com.au/heraldsun/story/0,21985,24589297-663,00.html
THE Russian navy will hold war games in the Indian Ocean in a bid to boost its global presence, a navy spokesman says, announcing Moscow's latest move to flex its military muscle.
Ships from the Pacific Ocean Fleet and forces from the Northern Fleet will meet and carry out joint military exercises in the Indian Ocean basin,'' navy spokesman Igor Dygalo today said in a statement.
Mr Dygalo did not specify when the exercises would take place, but he said warships from Russia's Vladivostok-based Pacific Ocean Fleet would leave "shortly'' for the Arabian Sea, docking in various ports on the way.
He called the Indian Ocean manoeuvres part of an effort to raise the Russian navy's worldwide profile before the end of the year


Gulf countries to hold joint naval exercises with Nato
http://www.thenational.ae/article/20081101/FOREIGN/320451753/1011/SPORT
MANAMA // Four Gulf navies are to take part in maritime exercises with visiting Nato ships this week, the first operation under the 2004 Istanbul Co-operation Initiative (ICI).The initiative, which calls on the alliance to work with the countries of the region, aims to contribute to long-term global and regional security by offering Middle-Eastern countries security co-operation with Nato.

Thank you so much!!cheap polo shirts men'ssweate,Burberry Polo Shirts lacoste sweater, ralph lauren Columbia Jackets,ski clothing. Free Shipping, PayPal Payment. Enjoy your shopping experience on mensclothingus.com.You can find the father who desire fashionable, intellectual mens clothing simultaneouslyGod bless you!I really agree with your opinions.Also,there are some new fashion things here,gillette razor blades.gillette mach3 razor bladesfor men.As for ladies,gillette venus razor blades must the best gift for you in summer,gillette fusion blades are all the best choice for you.Fantastic!God bless you!Meanwhile,you can visit my ,we have the highest quality but the lowest price fashion products wholesale from China.Here are the most popular China Wholesale products for all of you.You can visit .Also the is a great choice for you.

Charlestoncheap columbia jackets. turned a pair of double plays to do the trick. spyder jacketsThe had at least one runner on in every inning but the first and outhit the RiverDogs by a 12-6 margin Lawal should be a focal point of the Yellow cheap polo shirts along with highly touted newcomer, 6-9 Derrick Favors, rated as the No. 1 power forward on the ESPNU 100. The Yellow Jackets