* The first sentence says it all, the world's economic fears pushed aside -The Criminals in DC
want to distract the masses while they steal their money. It's like being mugged on the subway by a team of professional thieves who get your attention while one of the gang gets your wallet.
Does ANYONE believe in the terror scam anymore? We need to arrest the US Government
now more than ever. 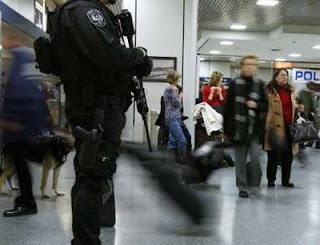 Cops, Feds Armed With M16s On Patrol For Forseeable Future

The world's economic fears were violently pushed aside on Wednesday by another global threat -- terrorism. A massive coordinated attack was launched in Mumbai, India just hours after the FBI warned that Al Qaeda may be targeting New York's subways and railroads. If Al Qaeda terrorists have their way there will be chaos and mayhem here this holiday season, a mass transit bomb plot that would probably affect all the subway and train lines at Penn and Grand Central stations. "The threat is serious, the threat is significant, and it is plausible," said Congressman Peter King, R-Long Island, a member of the House Homeland Security Committee. Uniformed officers, including this NYPD Counter Terrorism Squad members and Amtrak cops with M-16s, flooded Penn Station Wednesday after the FBI said it had received a "plausible but unsubstantiated" report that Al Qaeda operatives discussed a plan two months ago to bomb New York City's mass transit system. The report said: "These discussions reportedly involved the use of suicide bombers or explosives placed on subway/passenger rail systems." Sources told CBS 2 HD the plot involved the Long Island Rail Road. If the explosion went off in Penn Station, the source said, it would affect transportation of Amtrak's northeast corridor between Boston and Washington, LIRR service and New York City subway service. "This is definitely linked to Al Qaeda and they had very significant details about exactly how they would carry out the attack, where they would carry it out -- that's what makes it sound so plausible," Rep. King said. (cont...)
Posted by NXNGRG at 8:53 PM

A Japanese Anime Cosplay convention being held for the fourth consecutive year. As in years past, the event will feature everything from cosplay (a combination of the words Cosplay Costumes and play, Cheap Cosplay refers to individuals dressing up in outlandish Wholesale Costume) in which attendees dress up as their favorite anime cosplay costumes characters and become part of the action. Japanese School Uniform becomes more and more popular now. The hot cosplay has naruto cosplay, Final Fantasy Cosplay, Bleach Cosplay,Kingdom Hearts Cosplay. Especially for cosplay naruto.