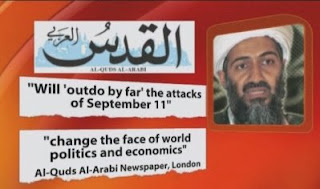 Osama bin Laden is planning an attack against the United States that will "outdo by far" September 11, 2001, an Arab newspaper in London has reported.
And, a former senior Yemeni al-Qaeda operative said, the terrorist organisation has entered a "positive phase", reinforcing specific training camps around the world that will lead the next "wave of action" against the West.
The warning, on the front page of an Arabic newspaper published in London, Al-Quds Al-Arabi - and reported widely in the major Italian papers - quotes a person described as being "very close to al-Qaeda" in Yemen...

Brzezinski: Obama may be tested
http://www.presstv.ir/detail.aspx?id=74757&sectionid=3510203
A former US national security adviser says President-elect Barack Obama may be tested by terrorists after he takes office on Jan. 20. "It's possible. There's no way of predicting that. It's a possibility, but it's by no means a certainty," former Carter administration national security adviser Zbigniew Brzezinski said in an interview with Deutsche Welle. Brzezinski said that history shows that every new US president is tested by transitional challenges and circumstances.

Warnings from world leaders all within 72 hours
http://www.prisonplanet.com/warnings-from-world-leaders-all-within-72-hours.html
Posted by NXNGRG at 7:38 PM

Usama Bin Laden is wanted in connection with the August 7, 1998, bombings of the United States Embassies in Dar es Salaam, Tanzania, and Nairobi, Kenya. These attacks killed over 200 people. In addition, Bin Laden is a suspect in other terrorist attacks throughout the world. Bin Laden issued two fatwas in 1996 and then again in 1998 that Muslims should force the United States and its allies to withdraw their military forces from the Arabian peninsula, by attacking American military and civilian targets.
--------------------

People will be steeped in beast worship and they will wake up when it's too late. Not all that glitters is gold.

The U.S. military was responsible
for 9/11, that is the point of my blog. As for the other terrorists
attacks, you say Usama was wanted in connection to the crimes. Have you studied the evidence? I have not, but having looked at 9/11 and 7/7, I know there was no "Al Qeada"
involved.

It wasn't just the military though. Quite a few people other than the military had a hand in all this, such as: Dick Cheney and "Dubya", the Bilderbergs, Larry Silverstein (owner of WTC).

You can't really blame the military collectively, as the troops themselves were duped into going to war, all for war profiteering of the greedy elite. War is waged for profit, as well as the furthering of the NWO agenda. The current threataganda is just like the stuff we were fed prior to 9-11, which is what really bothers me. The next attack could be an assassination on Obama, coupled with a nuclear and biological attack. A 3 in 1 combo. The forces of the NWO seem to love the number 3 for its occult significance. Ever heard of the power of 3 from the show Charmed? It comes from an old belief in witchcraft. It's a blasphemy of the Holy Trinity in a way.

Genetic food, stem cell research, cloned animals, etc are all perversions of life and therefore a mockery of God's design. It's satanic forces in true form. Think about it!