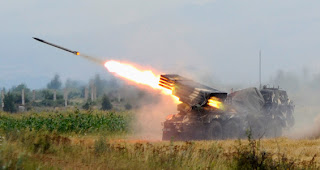 WASHINGTON (Reuters) - The United States told Russia on Friday to withdraw its forces from U.S. ally Georgia and stop its air attacks on the tiny Caucasus state following fighting in the breakaway region of South Ossetia.
"We call on Russia to cease attacks on Georgia by aircraft and missiles, respect Georgia's territorial integrity, and withdraw its ground combat forces from Georgian soil," U.S. Secretary of State Condoleezza Rice said in a statement.
Rice issued her statement as Georgia, a former Soviet state that now wants to join NATO, said it would declare martial law as it battled to get control of the rebel enclave, which was backed by Russian forces.
Both Rice and the White House urged an immediate cease-fire in South Ossetia, and U.S. officials said they would send an envoy to the region to help mediate.
As fighting raged in and around the South Ossetian capital of Tskhinvali, Georgian President Mikheil Saakashvili said Russia and Georgia were at war....

U.S. Aircraft Carriers Head For The Gulf; Kuwait Prepares "Emergency War Plan" http://www.allheadlinenews.com/articles/7011874353Kuwait City, Kuwait (AHN) -- Two additional U.S. Navy aircraft carriers are on their way to the Gulf and the Red Sea, according to Kuwait Times. Kuwait began finalizing its "emergency war plan" on being told the vessels were bound for the region.
The U.S. Navy will neither confirm nor deny that carriers are currently en route. U.S. Fifth Fleet Combined Maritime Command located in Bahrain said it could not comment because of what a spokesman termed "force-protection policy."
While the Kuwaiti daily did not name the ships it believes are heading for the Middle East, The Media Line's (TML) defense analyst said they could be the USS Theodore Roosevelt and the USS Ronald Reagan. 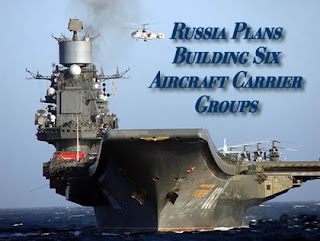 August 08, 2008: Speaking to journalists on the occasion of the Russian Navy Day celebrations, the commander of the Russian Navy, Admiral Vladimir Visotskiy confirmed the the Russian Navy is planning to deploy six aircraft-carrier groups with its Northern and Pacific fleets. They will be operated within a new, network-centric task groups, closely integrated with Russian air force and air-defense assets via Russia’s military-satellite network. (more...)

The SUGV, or Small Unmanned Ground Vehicle, takes a look around Doña Ana Range Complex, N.M., July 30, during a three-day training exercise conducted by Soldiers of the 2nd Combined Arms Battalion to test the experimental technologies of the Army Future Combat Systems. Photo by Stephen Baack
FORT BLISS, Texas (Army News Service, Aug. 7, 2008) -- Soldiers of the 2nd Combined Arms Battalion participated in a three-day training exercise at Doña Ana Range Complex, N.M., July 28-30 that tested the experimental technologies of the Army Future Combat Systems.....
Fighter jets over Annapolis
http://www.hometownannapolis.com/cgi-bin/read/2008/08_07-22/CAN
The sounds of fighter jets over Annapolis airspace Tuesday night came from a military exercise conducted by the North Aerospace Defence Command and Federal Aviation Administration, said Master Sgt. Tony Hill in the NORAD public affairs office.
The exercise, called Falcon Virgo.....
DARPA Aims at Heat-Sensing Rifle Scopes, Hypersonic Jets
http://www.cqpolitics.com/wmspage.cfm?parm1=3&docID=hsnews-000002935686
Flu pandemic 'gravest risk to UK'
http://news.bbc.co.uk/2/hi/uk_news/politics/7548593.stm
A flu pandemic is the gravest threat to UK security as it could claim up to 750,000 lives, according to a new National Risk Register.
The document, published for the first time, weighs up the likelihood of threats and their potential impact.
The most likely threats are attacks on the transport network and on computer and communications systems.
Britain has stockpiled enough doses of the antiviral drug Tamiflu to treat 25% of the population, the document says.
The risk register, which had been kept secret until now and will be updated annually by the Cabinet Office, sets out the various dangers faced by the UK and how they are viewed by government advisors.
Experts agree that there is a high probability of another influenza pandemic occurring
National Risk Register
BBC security correspondent Frank Gardner said that while officials insisted the register was not intended to rank dangers in any kind of priority, it was clear that pandemic flu had emerged as the gravest threat to national security.
Pandemic Preparedness in Freeborn County (MN)
http://kaaltv.com/article/stories/S537194.shtml?cat=10219
New Underwater Anti-Terrorism Technology to Patrol San Francisco Bay
http://www.istockanalyst.com/article/viewiStockNews+articleid_2493300~title_New-Underwater.html
Contra Costa County Purchases Underwater Inspection System from Coda Octopus
Coda Octopus Group, Inc. (OTCBB: CDOC) said today the Company’s Underwater Inspection System™ (UIS), developed in cooperation with the US Coast Guard, has been purchased by the Sheriff’s Office of Contra Costa County, CA. Contra Costa County will be the first on the West Coast to permanently deploy the UIS, developed after the 9/11 attacks to address the need for a new generation of port security technology to respond to underwater threats.
“The UIS will play the key role in enhancing our underwater security capability and assisting our efforts to secure shore side critical infrastructure in the California Bay and Delta regions. Having seen this unique technology in action when the All-Star Game was held in San Francisco, we are very excited to add this powerful 3D real time sonar technology to our counter terrorism efforts. This is the only system of its kind that can produce the sort of detailed information we need and in real time, which significantly improves our capability to protect the public”, commented Lieutenant Will Duke of the Contra Costa County Office of the Sheriff.
Jason Reid, Coda Octopus President and CEO, said he viewed the Contra Costa order as a significant milestone for the Company. “We have always envisaged the ports and local law enforcement agencies of the United States as a very large and important market for these devices”, Reid said. “The orders in recent months by Jacksonville Sheriff’s Office and now Contra Costa confirm our belief in the uniqueness and importance of the technology and of the products we have to offer”, he continued.
Reid also said, “A large number of US law enforcement agencies and ports have shown significant interest in the UIS, and we look forward to confirming additional orders in the near future.”
Vermont Anti-Terror Unit Gets Consolidated Headquarters
http://www.wcax.com/Global/story.asp?S=8807452&nav=4QcS
Sen. Patrick Leahy, D-Vermont, and FBI director Robert Mueller announced a recently-formed Joint Terrorism Task Force will locate in a centralized place -- the federal Law Enforcement Support Center in Williston.
Leahy and Mueller also toured a computer forensics room at the Burlington Police Department. This kind of work helped crack the case of murdered teenager Brooke Bennett last month. The new task force based in Williston joins more than a hundred similar task forces across the country. Federal, state and local authorities will coordinate major investigations and intelligence.
"There is no specific threat that triggered the movement of the joint terrorism center here," Mueller said, "but a recognition and a realization that we all are more effective when we co-locate and are able to exchange information across the hallway, as opposed to on the telephone."
Posted by NXNGRG at 3:16 PM