* I didn't have too much time for research today, Bernie Sanders
and Peter Welch, Two VT. Politicians appeared at a free waterfont concert - where of course I had to go and make a statement. The concert was called DemROCKracy - a show by former Phish member Mike Gordon to "get the vote out" I had a banner that read:
" DEMOCRACY??? AMERICA IS A LIE!
- Fake elections
- Mass murder of 3,000 civilians by our own military on 9/11
- Concentration camps
- Shredded Constitution
- Wars of aggression
- A Senator (Leahy) blackmailed by anthrax etc etc.....

NYC Holds Largest Ever Counterterror Exercise (update)
Multiple Law Enforcement Agencies Put Choke Hold On New York Harbor As Part Of 'Operation Sentinel' http://wcbstv.com/topstories/Counter.Terror.Exercise.2.796595.html
US Warns Russia To Halt 'Invasion' Of Georgia
http://voanews.com/english/2008-08-15-voa57.cfm
United States Secretary of State Condoleezza Rice has condemned Russian military operations in the former Soviet republic of Georgia, saying the action reminds her of the Soviet invasion of Czechoslovakia in 1968. She spoke in Georgia where the Georgian President Mikheil Saakashvili declared that his country would never surrender despite Moscow's military might. Stefan Bos reports for VOA from the Georgian town of Zestaponi, which is feeling the impact of ongoing fighting. * Is a comment even necessary? Iraq...
Mass Casualty Drill Held At F.E. Warren AFB
http://www.kgwn.tv/story.aspx?ID=310&Cat=2 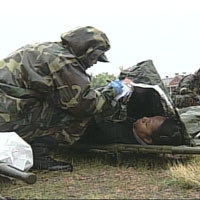 Alex Hannum Reports: If you saw a little extra activity around FE Warren Air Force base this week, it was all part of a drill to test the base's emergency response.It looks like a real life disaster, but this is all part of a training exercise put on by Air Force Space Command and FE Warren.Friday's drill was the culmination of a 10 day 50-thousand dollar exercise to prepare for, and combat potential terrorist threats.
Posted by NXNGRG at 6:47 PM