http://www.hindu.com/thehindu/holnus/001200808131522.htm
New Delhi (PTI): Building on the goodwill generated in last year's ground-breaking military drill, Indian and Chinese armies are likely to hold their second joint exercise in December on Indian soil to enhance the steadily improving ties between the two powerful militaries of the world.
A high-level Chinese military delegation will visit New Delhi later this month to finalise details of the joint exercise which officials say will be much "bigger" this year.
"The second joint military exercise between People's Liberation Army (PLA) and Indian Army is likely to be held in December," a top Chinese diplomat told PTI.
"A Chinese delegation will be in New Delhi after the Olympic Games to finalise dates and other details of the exercise," he said.
Asked about preparations of the PLA, he said they are looking forward to participate in the joint exercise as it will help enhancing ties between the two armies.
In a sign of warmer ties, India and China conducted their first ever joint exercise code-named 'Hand-in-Hand 2007' at Kunming Military Academy and in a hilly terrain near Kunming in China's Yunnan province from December 21 to 25 last year with the spotlight on anti-terrorism drill. ....
US Sends Military Relief Flights to Georgia
http://www.voanews.com/english/2008-08-13-voa40.cfm

President Bush, accompanied by Secretary of Defense Robert Gates (r) and Secretary of State Condoleezza Rice delivers a statement on Georgia, 13 Aug 2008
The U.S. military is sending at least two huge cargo planes into Georgia to deliver humanitarian supplies, and will also put an assessment team into the country to help determine future needs. VOA's Al Pessin reports from the Pentagon.
During a White House statement, President Bush said he had ordered Defense Secretary Robert Gates to lead a U.S. relief effort for Georgia, and announced the dispatch of the first planeload of supplies."This mission will be vigorous and ongoing," said President Bush. "A U.S. C-17 aircraft with humanitarian supplies is on its way. And in the days ahead we will use U.S. aircraft as well as naval forces to deliver humanitarian and medical supplies."
The Olympic Games Opening Ceremony did not take place
http://blogs.smh.com.au/newsblog/archives/dom_knight/019718.html
I'm fascinated by the report that said that part of the footage of the Beijing Olympics Opening Ceremony was faked, and since it was top story on this website yesterday, I'm evidently not the only one. The organisers went to great lengths to show us what the giant footstep-shaped fireworks would have looked like, had it been possible to film them. The 55 seconds of footage apparently took the head of the visual effects team, Gao Xiaolong, almost a year of his life to create, and sadly for him, the ultimate result is that everyone's now shocked that some of the footage of a supposedly live event was in fact completely artificial.
But does it matter whether they show us what's actually happening, or a shot that simulates what it would have looked like if it could have been filmed? If you'll forgive me tapping into a part of my arts graduate learning that's actually, for once in a blue moon, relevant, this reminds me of the famous argument made by Baudrillard in 1991 (sorry, I did try to warn you) that was ultimately published as the book "The Gulf War Did Not Take Place".
Its observation was that from a Western perspective at least, the first conflict with Iraq was almost entirely virtual - it was observed and experienced primarily at a distance, on screens. Even for the pilots flying on bombing missions, it was all about the "smart bombs" whose cameras broadcast back their success in locating the targets. Vietnam may have been described as the first armchair war, but the first Gulf War was practically fought in armchairs by the allied combatants.
So, Baudrillard's point was that the whole thing could have been an elaborate simulation, and many of the participants would have been none the wiser. Of course, for the people killed, the Gulf War very much did happen, and quite definitively so. But his point was that so often in the modern era, our sense of reality is derived from images on a screen, which we trust as being an honest representation of reality, but don't necessarily reflect it.....
City officials install surveillance cameras around Somerville
http://www.wickedlocal.com/somerville/homepage/x1806340662/City-officials-install-surveillance-cameras-around-Somerville 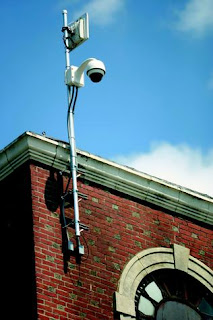 If you have the strange feeling that you’re being watched, it’s probably because you are.
Officials have already installed four surveillance cameras around Somerville and there are plans to install at least three more before fall.
Somerville is not alone in its quest to spy on city streets. This year, government officials plan to install nearly 100 new surveillance cameras in nine cities and towns in the Greater Boston area with federal grants from the U.S. Department of Homeland Security......


Networks of the Future: Extending Our Senses into the Physical World
http://www.physorg.com/news137855709.html
(PhysOrg.com) -- The picture of a future with wireless sensor networks-webs of sensory devices that function without a central infrastructure--is quickly coming into sharper focus through the work of Los Alamos National Laboratory computer scientist Sami Ayyorgun.
Proponents of this new technology see a world with deployments to improve a wide range of operations. Engineers could wirelessly monitor miles of gas and oil pipelines stretching across arid land for ruptures, damage, and tampering. Rescue workers might detect signs of life under the rubble of a collapsed building after an earthquake, thanks to a network of sensors inside the structure. Armed forces could keep an eye on a combat zone or a vast international border via a sensor network that could promptly provide alerts of any intrusion or illicit trafficking. ....
CACI Reports Record Revenue and Operating Income for Fiscal 2008 Fourth Quarter and Full Year
http://www.marketwatch.com/news/story/caci-reports-record-revenue-operating/story.aspx?guid=%7BC6422958-37F3-414C-BFF2-27303A386DAB%7D&dist=hppr
CACI provides innovative solutions to meet America's needs in national defense, intelligence, homeland security, and the improvement of government services, and is a leading strategic consolidator in its market space.
Fourth Quarter Results
For the fourth quarter of Fiscal Year 2008 (FY08), we reported record revenue of $655.0 million, up 25.9 percent over fourth quarter of Fiscal Year 2007 (FY07)
Advanced Life Sciences Awarded U.S. Department of Defense Biodefense Contract Valued at up to $3.8 Million
http://www.earthtimes.org/articles/show/advanced-life-sciences-awarded-us,503394.shtml
After combat, citizen soldiers turning to alcohol
http://ap.google.com/article/ALeqM5gqWpTU6nOSW3PZMSzvSW4gub_EjwD92GURFG0
* with all the BS around 9/11, many activist are too...
Posted by NXNGRG at 3:22 PM