* I think it high time for idiots in the truth movement to stop talking about Building 7 and realize we are teetering on a precipice of an unparalled calamity: War among the Super Powers. 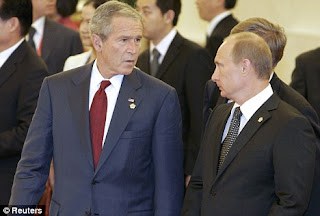 Georgian officials tonight claimed the country had been 'overrun' by Russian troops after a full-scale ground invasion.
Amid reports that Moscow forces had taken the town of Gori - and were marching on the capital Tsblisi - Georgian soldiers appeared to be in full retreat.
Troops were apparently in complete chaos as a full-scale rout pushed them back through the countryside.
Meanwhile, the civilian crisis intensified with thousands of refugees fleeing the seemingly unstoppable advance of the Russian army......

Despite the US government's massive propaganda to popularize implantable identification microchips, most Americans are strongly against the use of VeriChip. In 2004, the US Food and Drug Administration (FDA) granted clearance for VeriChip, an identification system using implantable Radio-frequency identification (RFID) technology, consisting of a handheld reader, a microchip approximately the size of a grain of rice (containing a unique 16-digit ID number), which is implanted in the right arm, and a database. VeriChip Corporation, the producer of the microchips, considers them as a fast and secure way of accessing medical information for thousands of patients brought in emergency departments either unconscious or unable to communicate due to medical conditions. The US and certain other countries are currently implanting these microchips in the body of infants. There has also been talk of replacing ID and credit cards with VeriChip. .....

Hardware used to spot gamma ray bursts could soon be helping direct troops on a battlefield.
Defence firm Qinetiq has brought the technology down to Earth to make a monitoring system that may be able to track thousands of targets.
The futuristic system manages the feat without using lenses to gather light from the scene it is watching.
Instead it employs a sensor array, a special "mask" and image processing software to picture a scene. ....


Mercs, PMCs Cash in to Tune of $85B in Iraq
http://www.nydailynews.com/blogs/dc/2008/08/mercs-pmcs-cash-in-to-tune-of.html
The government has handed out at least $85 billion in contracts to mercenaries and private military contractors in Iraq, according to a report issued today by the non-partisan research arm of Congress.
The Congressional Budget Office reports that for every uniformed serviceman or woman in the war zone there is a much better paid private contractor on the ground in Iraq, making it one of the most outsourced wars in U.S. history.
“The United States has used contractors during previous military operations, although not to the current extent. According to rough historical data, the ratio of about one contractor employee for every member of the U.S. armed forces in the Iraq theater is at least 2.5 times higher than that ratio during any other major U.S. conflict, although it is roughly comparable with the ratio during operations in the Balkans in the 1990s,” the report states.
The PMCs and mercs work for companies like Halliburton subsidiary Kellogg, Brown and Root, DynCorp and Blackwater.
“Although personnel counts are rough approximations, CBO estimates that as of early 2008 at least 190,000 contractor personnel, including subcontractors, were working on U.S.-funded contracts in the Iraq theater.


Homeland Security setting up counterspy unit
http://ap.google.com/article/ALeqM5jEybgxeejxRVY8QGQnVQzmyzL7swD92H0QBG0
"Counterintelligence is an organized effort to block an enemy's sources of information and access to sensitive material. It can also be used to give misinformation." * I wonder if Portland "Indy"
media is part of the program?

US boasts of laser weapon's 'plausible deniability'
http://technology.newscientist.com/article/dn14520-us-boasts-of-laser-weapons-plausible-deniability.html
An airborne laser weapon dubbed the "long-range blowtorch" has the added benefit that the US could convincingly deny any involvement with the destruction it causes, say senior officials of the US Air Force (USAF).
The Advanced Tactical Laser (ATL) is to be mounted on a Hercules military transport plane. Boeing announced the first test firing of the laser, from a plane on the ground, earlier this summer.
Cynthia Kaiser, chief engineer of the US Air Force Research Laboratory's Directed Energy Directorate, used the phrase "plausible deniability" to describe the weapon's benefits in a briefing (powerpoint format) on laser weapons to the New Mexico Optics Industry Association in June.
Plausibly deniable
John Corley, director of USAF's Capabilities Integration Directorate, used the same phrase to describe the weapon's benefits at an Air Armament Symposium in Florida in October 2007 (see page 15, pdf format).
As the term suggests, "plausible deniability" is used to describe situations where those responsible for an event could plausibly claim to have had no involvement in it. (Like the WTC)


BU wants to start training at biolab
http://news.bostonherald.com/news/regional/general/view/2008_08_12_BU_wants_to_start_training_at_biolab/srvc=home&position=recent
BOSTON - Boston University has asked the city for permission to start conducting training exercises at a laboratory being built to study some of the world’s most dangerous germs.
Construction of the $198 million National Emerging Infectious Diseases Laboratories in the South End is scheduled to end this summer. But actual research into Ebola, plague, anthrax and other deadly biological agents is not expected to start until next year.


India, Singapore to conduct joint army exercises
http://economictimes.indiatimes.com/News/PoliticsNation/India_Singapore_to_conduct_joint_army_exercises/articleshow/3357847.cms
NEW DELHI: India and Singapore on Tuesday signed a bilateral agreement to conduct joint army training and exercises in India. Defence Secretary Vijay Singh signed the agreement on behalf India, while Chiang Chie Foo, Permanent Secretary (Defence) was the signatory from the Singapore side. The bilateral agreement is in furtherance to the agreement signed between the two Governments on Defence Cooperation on October 13, 2003 that seeks to provide facilities in India to the Singapore Armed Forces (SAF) for the purpose of joint military training and exercises.


Sukhois shine at Red Flag exercise in US
http://timesofindia.indiatimes.com/India/Sukhois_shine_at_Red_Flag_exercise/articleshow/3353873.cms
NEW DELHI: Tearing into the sky as part of the Blue Forces to defend against the "aggressor" Red Forces of F-15s and F-16s on Monday, India's eight frontline Sukhoi-30MKI fighters were the cynosure of all eyes at the Nellis US Air Force base in Nevada. This, after all, is the very first time that the frontline Russian-origin Sukhoi-30MKI fighters are taking part in war games on US territory. "We have trained long and hard for this day," said IAF contingent commander Group Captain D Choudhury, in a pep talk to his 'air warriors' before the world-famous 'Red Flag' air combat exercise kicked off in Nevada.