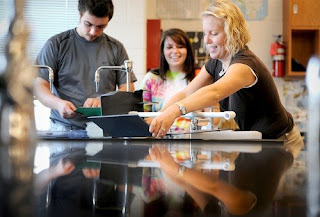 Instead of the traditional biology class for freshmen, it will be physics at North County High School. At Meade High School, students might be taking field trips to the nearby National Security Agency or tackle such assignments as concocting an emergency evacuation plan.In an effort to engage students in more real-world experiences in the classroom, Anne Arundel County's public schools will launch the school year tomorrow with a Science, Technology, Engineering and Math (STEM) magnet program at North County and a homeland security "signature" program at Meade. 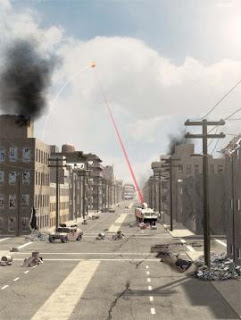 For the moment, it's all R&D business as usual. Earlier this week, both Boeing and Northrop Grumman put out statements about their ongoing work on U.S. Army's High Energy Laser Technology Demonstrator, or HEL TD. And for Boeing, it was also a chance to crow about a contract win: $36 million to continue its work on a HEL TD design.

The work on the HEL TD is intended to lead eventually to a truck-mounted laser weapon that could shoot down rockets and artillery shells.(Credit: Boeing)
With that money, Boeing says it will first finish its design work, and then move on to building and testing a ruggedized beam control system on a heavy-duty truck (specifically, the Army's Heavy Expanded Mobility Tactical Truck). The defense contractor finished the preliminary design of the beam control system earlier this summer. Boeing also plans to develop the systems-engineering requirements for the complete HEL TD.
Northrop Grumman, for its part, this week said that it has completed all preliminary design review requirements for a rugged beam control subsystem for the HEL TD. ....

Emergency drill set to prepare towns for potential flu pandemic (CT)
http://www.middletownpress.com/site/news.cfm?newsid=20088759&BRD=1645&PAG=461&dept_id=665530&rfi=6
CROMWELL - The town this fall will once again take part in an emergency drill that doubles as a flu clinic for residents.
Cromwell will join Middletown in holding the one-day drill/clinic on Nov. 5, according to Fred Curtin, the town's emergency management coordinator.Officials from the two towns held their first planning session for the exercise last week.The towns cooperated on a similar program last year, Curtin reminded a questioner on Thursday.The towns will use the exercise as a rehearsal for a possible flu pandemic. To give the drill an extra added air of reality - and do something helpful for a number of residents - volunteers will be bused to Middletown, to the Wesleyan University field house, where they will receive a flu shot.Only so many people will be able to get the shots, however. Curtin said he will make the information available about how to register to take part in the program as it becomes available.The residents who do sign up will "meet at Pierson Park, and then board a vehicle and be transported to Middletown to Wesleyan University, where the flu shot will be administered," Curtin said.

HRL to Begin Pioneering Research in Neuromorphic Electronics that Function LiketheBiologicalBrain (DARPA) (linked removed)
Dear Editor
I need to ask you to kindly remove the link to our press release...
The information is wrong and should not have been sent out. Please accept our apologies for the error and we hope you will be able to take the page down rapidly......


Electronic binoculars from Northrop Grumman team to detect threats through brain activity
http://mae.pennnet.com/display_article/337722/32/NEWS/none/none/1/Electronic-binoculars-from-Northrop-Grumman-team-to-detect-threats-through-brain-activity/
LINTHICUM, Md., 23 Aug. 2008. Everyone who has ever watched the Star Wars films from George Lucas has probably at one moment wished they had Jedi abilities such as mind control or what Lucas called Jedi reflexes – knowing something will happen a second before it does.
A team led by Northrop Grumman's Electronic Systems Sector is looking to bring a similar threat detection capability to warfighters as part of an advanced research contract to develop a panoramic day/night optical system that will utilize human brain activity to detect, analyze, and alert foot-soldiers to possible threats.