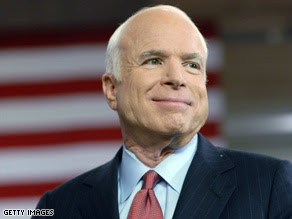 CENTENNIAL, Colo. - Threatening letters containing an unidentified white powder were sent to John McCain campaign offices in Colorado and New Hampshire on Thursday, officials said.
No injuries were immediately reported.
At least 19 people were examined at hospitals or were quarantined outside the office in Centennial, Colo., a Denver suburb. The office was evacuated, and authorities were trying to determine whether the powder was hazardous.
A McCain campaign aide said the Manchester, N.H., office had been evacuated and the staffers underwent medical examinations.
No other details were immediately available from New Hampshire.

You know, I'm not for supporting McCain, but sometimes I feel like supporting him just to stick it to the Democrats who lied to us and supported King Bush with more blank checks and no accountability.

I heard McBush is anti-UN and will cut military spending, which is something we need to help fix America.

:sigh: ... So many problems, impossible to fix even the most important.

The Cataclysm is soon upon us. The crash is very real and those who do not prepare or have the knowledge to make things needed to be independent, will be smudged out be FEMA plans. Have you noticed the Government buying out lots of food/water from stores? I'm seen the FBI many times, some for food riot drills.