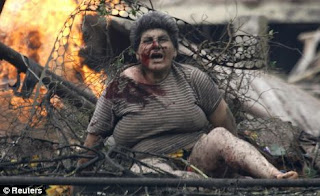 The Pipeline War: Russian bear goes for West's jugular
The war in Georgia escalated dangerously last night after Russian jets reportedly bombed a vital pipeline that supplies oil to the West.
After a day of heightening international tensions, Georgian leaders claimed that the Baku-Tbilisi-Ceyhan pipeline, which transports oil from the Caspian Sea to Turkey, had been attacked. But it is thought the bombs missed their target.
Their claims came after Russian jets struck deep into the territory of its tiny neighbour, killing civilians and ‘completely devastating’ the strategic Black Sea port of Poti, a staging post for oil and other energy supplies.
Reports last night also said that Russia had bombed the international airport in Tbilisi.....
http://www.dailymail.co.uk/news/worldnews/article-1043185/The-Pipeline-War-Russian-bear-goes-Wests-jugular.html
New Spasm of Violence in Western China as 7 Die in Wave of Bombings
http://www.nytimes.com/2008/08/11/world/asia/11xinjiang.html?ref=asia

The Hualin Market in Kuqa, which was bombed by the attackers
BEIJING — The violence in the western Chinese region of Xinjiang rose sharply Sunday morning with the deaths of a security guard and at least six suspects after a daring series of bombings that began with a predawn assault on a police station, the state news media reported.
The attacks, coinciding with the first weekend of the Beijing Olympics, occurred less than a week after what the Chinese authorities had previously described as China’s worst terrorist assault in recent memory, in the Xinjiang city of Kashgar. Last Monday, two Uighur Muslims rammed a truck into a group of paramilitary officers who were doing their morning exercises, then attacked with explosives and knives. Sixteen officers were killed and several more were wounded.
The violence came as the Chinese authorities have accused the East Turkestan Islamic Movement, or ETIM, of plotting terror attacks against the Olympics. The Chinese government and the United States State Department list the group as a terrorist organization, though some specialists on Xinjiang question its scope and potency. Some human rights groups have accused China of exaggerating the threat to justify its crackdown against Uighurs.....
DHS preps for attack during transition
http://federaltimes.com/index.php?S=3666514 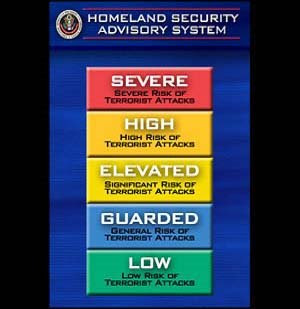 August 10, 2008
At a federal installation in Georgia three months ago, more than 100 senior career employees from across the Homeland Security Department assembled for an exercise in which they oversaw a simulated government response to a large flood in the Midwest.
The goal was to prepare career managers for what could be the biggest test they would ever face: responding to a large-scale disaster — such as a terrorist attack or natural calamity — during the presidential transition, a time when political leadership is lacking.
Top career officials at DHS’ Federal Emergency Management Agency, Customs and Border Protection, Immigration and Customs Enforcement, Coast Guard and other agencies are learning not only how to run their own agencies during crisis, but also how to coordinate their responses with one another, Elaine Duke, the department’s undersecretary for management, said in an interview.
Several more training sessions — tabletop simulations and field exercises — are planned for the coming months, she said. ....
Restoring intelligence
http://www.pittsburghlive.com/x/pittsburghtrib/opinion/s_582046.html
"While every intelligence agency has grown, there are now more civilian contractors than the entire civil work force and even the penetration of hostile countries' intelligence is outsourced to giant corporations.
About 70 percent of the $60 billion a year spent on foreign and domestic intelligence goes to companies such as Blackwater Worldwide, DynCorp, SAIC, CACI International and the doyen of them all, Booz Allen Hamilton.
The CIA's top agents in the National Clandestine Service are staffed in excess of 50 percent civilians from such huge corporations, in what is fondly spun as a "public-private partnership" by the bureaucrats. Veteran intelligence officers term the new people, responsible for some of the worst mistakes in recent years, as "mercenaries working to perpetuate corporate interests."
This "public-private partnership" really took off during the Clinton years with costs far exceeding alleged savings and consequences to our laws looking to be irreparable.
According to Maj. Gen. Anthony Taguba, investigating Abu Ghraib prison, four of CACI's interrogators were "either directly or indirectly responsible" for torturing prisoners. Nothing has happened to them.
And while the Pentagon's Total Information Awareness program was killed in Congress, as it was too much like a Gestapo operation, in reality it was reborn in programs by SAIC and Booz Allen Hamilton.
The new presidential intelligence advisory board will not be able to address these problems or the feuds between Robert Gates and McConnell, or between the president and the CIA's Director Michael Hayden. Manifestly, the president has not been briefed about the parlous state of our intelligence from Iran, North Korea and Libya, where we have neither diplomatic representation nor intelligence assets of our own and rely on the Chinese, French, British and Israeli agents on the ground.
As the former great CIA Director Richard Helms said years ago, "If we are not believed, we have no purpose."
"Edible Optics" Could Make Food Safer (NANO TECH WATCH)
http://nanotechwire.com/news.asp?nid=6450
Imagine an edible optical sensor that could be placed in produce bags to detect harmful levels of bacteria and consumed right along with the veggies. Or an implantable device that would monitor glucose in your blood for a year, then dissolve.
Scientists at Tufts University's School of Engineering have demonstrated for the first time that it is possible to design such "living" optical elements that could enable an entirely new class of sensors. These sensors would combine sophisticated nanoscale optics with biological readout functions, be biocompatible and biodegradable, and be manufactured and stored at room temperatures without use of toxic chemicals. The Tufts team used fibers from silkworms to develop the platform devices. ...
Posted by NXNGRG at 5:40 PM