Police in Western China Hit by Terror Attack
http://www.businessweek.com/globalbiz/content/aug2008/gb2008084_291182.htm?chan=top+news_top+news+index_global+business
A bombing that killed 16 police in western Xinjiang underscores the vulnerability of areas outside of Beijing and heightens fears about Olympics security

An ethnic Muslim (2nd-L) is questioned by a Chinese policeman (L) as local police (R) look on at a security checkpoint on a highway in Keping County in China's far northwestern, mainly Muslim Xinjiang region on July 30, 2008


In the lead-up to the Summer Olympics, the Chinese government has launched a security clampdown in Beijing unprecedented in the country (BusinessWeek.com, 07/28/08). But in other parts of China, the security presence is not as intense, and on Aug. 4, terrorists took advantage. An attack on a border armed-police division in the far western region of Xinjiang killed 16 policemen and injured 16 others, China's official Xinhua news agency reported. Two attackers driving a truck threw explosives at a group of policemen as they were jogging along the street doing their morning exercises. According to Xinhua, police arrested the two and suspect the raid was the work of terrorists.
If so, it's the latest and deadliest yet by extremist separatists trying to create a separate state for the country's Uighurs, Muslims who speak a language related to Turkish. While supporters of the Dalai Lama, who want an independent Tibet, get far more attention in the international media, groups such as the East Turkistan Islamic Movement (ETIM) that want to turn Xinjiang into an independent state are alleged to be behind the most violent acts against the Beijing government, including recent bus bombings in Shanghai and the southwestern city of Kunming. 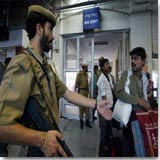 Serial bomb blasts in different parts of the country recently have made us re-think about the competency of the security and the police forces in fighting terrorism. The series of serial blasts recently , first in Bangalore followed by Ahmedabad and a failed attempt in Surat have clearly indicated that terror can be expected at any place. Failure of the Police to pin down the people responsible for causing terror is not new to us. The police forces have been failing repeatedly to track down any of the terrorist masterminds. Our country needs a sophisticated, advanced agency to combat terrorism and also suitable changes have to be brought into the Intelligence services with a strong collaboration between these two forces.....

BAE Systems designing smart urban weapons
http://www.unionleader.com/article.aspx?headline=BAE+Systems+designing+smart+urban+weapons&articleId=4c4bf43e-6284-417e-a766-50b20bb7a21c
NASHUA – Modern warfare in an urban environment isn't easy. Defeating the enemy is one thing, but defeating the enemy while minimizing civilian casualties and property damage is a tougher order.
Defense contractor BAE Systems Inc. has come up with a weapons system that could do just that. The ominously-named Advanced Precision Kill Weapon System (APKWS) turns small rockets fired from helicopters or fixed-wing aircraft into smart, laser-guided missiles with a high degree of target precision.
The system is designed to reduce collateral damage, while at the same time giving the military flexibility to engage the enemy -- even from a distance.

Qinetiq deal opens US intelligence market
http://business.timesonline.co.uk/tol/business/industry_sectors/engineering/article4456360.ece QinetiQ, the defence research company, will become a supplier to the American intelligence community, following the $104.5 million (£53 million) purchase of Dominion Technology Resources.
The acquisition is QinetiQ's sixth in the United States in the past 18 months and the company now makes 40 per cent of its revenues from that country.
The purchase of Dominion will enable QinetiQ to offer consulting and mission planning services to customers in the intelligence services.
Graham Love, chief executive of QinetiQ, said: “Dominion brings new customer relationships from within the US intelligence community and provides us with further growth opportunities within the broader North American market.”...

Cities put premium on protection against terrorism
Insurance a small price to pay for peace of mind
http://www2.ljworld.com/news/2008/aug/04/cities_put_premium_protection_against_terrorism/?city_local

The dragonfly built to spy
Tiny flying robots have the military abuzz with hopes of sending cameras deep behind enemy lines
http://technology.timesonline.co.uk/tol/news/tech_and_web/article4442818.ece

Bioterrorism's Threat Persists As Top Security Risk
http://online.wsj.com/article/SB121781124869708811.html?mod=googlenews_wsj
"The federal government has spent nearly $50 billion on programs to fight bioterrorism since 2001. Still, experience in New York City and elsewhere underscores the enduring difficulty of contending with this type of terror attack. Experts in the field say that the nation's ability to detect biological weapons is still inadequate in most locales, as is its ability to distribute drugs to the population once the lethal agent is identified. Hospitals warn that the volume of casualties from an effective attack could simply overwhelm facilities."

PSA Promises Pandemic Flu Will Strike Ohio
http://www.10tv.com/live/content/local/stories/2008/08/04/story_flu_psa.html?type=rss&cat=&sid=102
COLUMBUS, Ohio — A public service announcement by the Ohio Department of Health promises that the state will be struck by the pandemic flu.
"More Americans died from pandemic flu in the twentieth century than died in World War I," the ad states.
The ad began airing last week and will be seen through August 8. It was developed by the Ohio Department of Health and funded with a $400,000 federal grant, 10TV News reported.
"To tell people that, 'Knock knock knock, I want you to listen to this,' it has to be a little stark," said Bret Atkins of the Ohio Department of Health.
There is no pandemic flu now. While the bird flu has been percolating in Asia, it has proved much harder for people to spread than doctors first thought.
Atkins said the health department wants Ohioans to be prepared with information on their Web site, in case Olympic visitors return with more than souvenirs, 10TV News reported.
"We're going to have hundreds of thousands of people go to Asia for the Olympics, and diseases in this modern time of the jet age are really just a jet ride back to North American soil," Atkins said.....
Posted by NXNGRG at 3:25 PM

I have a bad feeling this month, looks like this is it. There's not much time left Greg. I really like your blog. Be careful, and get ready to run. I've been preping for survival (gear all ready to go).

Take care friend, you blog is one of the best on the net.

Thanks Lucid, I don't get much
exposure other than dedicated readers like yourself. I do this for my own sanity and people like
U - Peace brother