Nuclear War Russia vs U.S. - The Unthinkable at Hand?

Strategic Missile Forces plan several ICBM launches before end of year
http://www.interfax.com/3/422278/news.aspx
MOSCOW. Aug 26 (Interfax-AVN) - The Russian Strategic MissileForces are expected to carry out several combat-training and testlaunches of intercontinental ballistic missiles before the end of theyear. "Each launch is authorized by the Russian leadership and the numberof launches to be carried out this year could be adjusted," StrategicMissile Forces spokesman Col. Alexander Vovk told Interfax-AVN onTuesday
Cold War tension rises as Putin talks of Black Sea confrontation
A new Cold War between Russia and the West grew steadily closer yesterday after the Kremlin gave a warning about “direct confrontation” between American and Russian warships in the Black Sea.
Dmitri Peskov, a spokesman for Vladimir Putin, the Prime Minister, declared that Russia was taking “measures of precaution” against American and Nato naval ships. “Let’s hope we do not see any direct confrontation in that,” he said
http://www.timesonline.co.uk/tol/news/world/europe/article4622422.ece 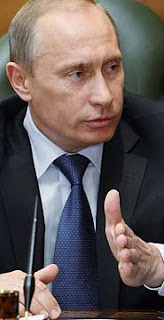 US, Russia anchor military ships in Georgian ports
http://apnews.myway.com/article/20080827/D92QQFJ82.html
BATUMI, Georgia (AP) - A U.S. military ship loaded with aid docked at a southern Georgian port Wednesday, and Russia sent three missile boats to another Georgian port as the standoff escalated over a nation devastated by war with Russia....
West tells Russia to keep out of Ukraine
http://www.ft.com/cms/s/0/54acc1fc-743d-11dd-bc91-0000779fd18c.html
Britain led a chorus of support for Ukraine on Wednesday as western fears rose of possible Russian attempts to build on its victory in Georgia by threatening neighbouring states.
Speaking during a visit to Kiev, David Miliband, the UK foreign secretary, called on the European Union and Nato to prepare for “hard-headed engagement” with Moscow following its military action in Georgia.
“Russia must not learn the wrong lessons from the Georgia crisis. There can be no going back on fundamental principles of territorial integrity, democratic governance and international law,” he said.
Navy: Gulf exercise to boost security
http://www.navytimes.com/news/2008/08/ap_navy_gulf_exercise_082708w/
DUBAI, United Arab Emirates — The Navy says American, British and Bahraini ships are carrying out a five-day exercise to improve security in the Persian Gulf and better protect coalition ships against vessels “deemed threatening.”
The Navy statement released Wednesday by the Bahrain headquarters of the 5th Fleet says the exercise is dubbed “Goalkeeper.” It started Sunday and is led by Britain’s Royal Navy Commodore Peter Hudson.
Hudson is quoted as saying the maneuvers will help fine-tune skills such as “locating and tracking” vessels that threaten ships patrolling the Gulf and “handling command-and-control” operations during a potential confrontation.
Gulf waters and the narrow Strait of Hormuz have seen close encounters between U.S. and Iranian vessels.
Turkey joins NATO early warning exercise
http://www.worldtribune.com/worldtribune/WTARC/2008/me_turkey0473_08_27.asp
ANKARA — Turkey has participated in a major NATO air exercise.
The Turkish Air Force contributed aircraft in a NATO airborne early-warning and alert exercise in the United States. The exercise took place in August 2008 and included 15 European and North American air forces.
"Our sole purpose is to be the eyes for the aircraft so they can be forewarned if another aircraft is in their vicinity -- friend or foe," Turkish Air Force pilot Capt. Gurhan Tarman said.
Local emergency teams practice terror drills
http://abclocal.go.com/wtvg/story?section=news/local&id=6355079
WTVG -- Federal, state, and local emergency teams joined forces along the Maumee to practice their terror drills
A terrorist attack can happen without warning and emergency crews have to be able to respond immediately. One possible target is Toledo's port. Federal, state, and local emergency teams joined forces along the Maumee to practice their terror drills.
Moving goods along the Maumee is a Toledo asset, but these waters can also be a channel for a terrorist attack. The possible threat is why a water-front hotel is a training-ground for the US Coast Guard and a room full of men and women.
Coast Guard Lieutenant Commander Rick Minnich has spent the last six months coordinating the schedules of police officers, FBI agents, and border patrol officers for the day-long terror drill. These are the men and women who'd respond to a real-life attack on the water. "Having been involved in the exercises and real incidents, I can say they are very realistic. It is real time, real life type scenarios that we use," says Minnich.
Homeland security experiment tests port security
http://www.bizjournals.com/tampabay/stories/2008/08/25/daily42.html?ana=from_rss
The U.S. Navy, U.S. Coast Guard and SRI International are testing new port security technologies and tactical procedures as part of a homeland security experiment in Tampa Bay waters through Aug. 28. The experiment began on Aug. 20.
The technologies, dubbed “Adaptive Force Package,” supports local incident response under the command of the Coast Guard’s port captain, with the involvement of numerous federal, state and local law enforcement agencies from Tampa Bay.
The Navy’s goal for the experiment is to demonstrate the technologies’ capabilities in safeguarding ports and waterways, a release said.
The Coast Guard will be responsible for incident command in the experiment. Its role is to coordinate the response and actions of private-sector maritime entities with military and civilian law enforcement actions.
Northrop Grumman Marks Milestone In Aerospace Development
http://www.wlox.com/Global/story.asp?S=8912024
MOSS POINT, MS (WLOX) - According to Site Manager Brian Mahoney, "Unmanned vehicles are the future, and it provides security for our troops."
Since Northrop Grumman opened the doors to its Unmanned Aircraft Center in 2006, Mahoney and his 70 member team have been building multi-million dollar aircraft to combat the war on terrorism.
"We have three programs in place - the Fire Scout Program, which is the Army's version of the Fire Scout. The VTUAV, which is the Navy's version. And we also have the Global Hawk program," Mahoney said....
Action/Reaction: U.S. Space Weaponization and China
http://www.armscontrol.org/act/2005_12/DEC-CVR
* For video links for today's protest at DHS in VT see below:
Not seen in vid, is the guys with guns and radios across the street. I told my friend NOT to videotape the Homeland Security bldg. or Staff. The second segment of the protest was not taped but was held at VT's new "Counter Terrorism" center in Williston. One of the spooks yelling at us from the security perimeter claimed he saw "both planes" hit the WTC - nice trick huh? The vibe was very ominous - America is crypto-Fascist ready to spring a full blown version - of course in New Orleans it has already happened. God help us....
http://blip.tv/file/1209071/
http://zhp.blip.tv/file/1209181/
http://zhp.blip.tv/file/1208953
Posted by NXNGRG at 5:43 PM