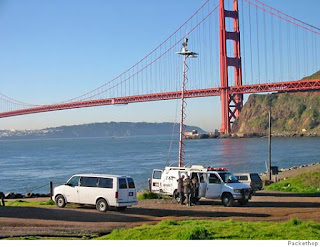 SAN FRANCISCO, CA (KGO) -- Parts of San Francisco are shut down this afternoon for a terrorism drill.
Police and firefighters are testing the city's response time in a theoretical weapons attack.
Several blocks in San Francisco's financial district were closed down for the day.
The fire department was calling this a real public-private partnership as they got the owners of the downtown building at 555 California Street to allow them to let it fall victim to a mock emergency.
The scene was the aftermath of a chemical attack in a downtown high rise- luckily this was only a drill.
"Each time we do this the better off all of us are," said San Francisco Fire Department Chief Joanne Hayes-White.
About 500 emergency responders from San Francisco, surrounding cities, the FBI and the Army are participating in this mock release of weapons of mass destruction.
There was also drama at 1 Post Street. A mock shooter went on a rampage where another unidentified chemical had been released.
"It's truly taxing the resources here in San Francisco, but that's what it's all about," said Hayes-White.
It all started at 10 this morning and from some outsider's perspectives things were moving slowly. Students playing victims were left lying there for hours.
"We know that things start out at a low level in these exercises today," said S.F. Police Chief Heather Fong.
"Initially where you'd want to go right in, you see victims on the ground, we need to make sure that we take a step back, pause for a moment and decide what our entry is going to be like," said Hayes-White.
As the mock decontamination went on this afternoon, a local businessman said his company could help stop the situation before it got to this point.
Mike Welden of Building Protection Systems stated "We have a break-through system that's designated by the Department of Homeland Security that will detect and identify the toxin in seconds and then automatically shut down the HVAC system so the toxins are no longer circulating through the building." This product was just released earlier this year, another idea at a time when the government is being criticized about the availability of materials that could be used to make a dirty bomb.
The Government Accountability Office released a report last month saying that advances in security were moving too slowly and that customs officials don't have enough equipment to detect radiation.
In the meantime FEMA is spending a quarter of a million dollars on today's drill.
"The money is absolutely worth it because if we don't spend it now it's going to cost us so much more later on," said Tom Saragoosa of the S.F. Fire Department.
Russian Report: CNN used Fake Video in Coverage of Georgia War
http://globalresearch.ca/index.php?context=va&aid=9854
VIDEO: Gorbachev describes Georgia Attack,, Media "Lies from Begining to End"
http://globalresearch.ca/index.php?context=va&aid=9857
------ ------- ------ ------- -------
* The item below falls outside the spectrum of my normal coverage, but in light of the use of CGI's and a lip synching little girl at the Olympics, i think it important for people to question
what they see with any news or purported representation of reality(especially since TV Fakery was used on 9/11) - Does NBC have financial reasons to rig the outcome? The ability ( I already looked into arguments with validity of electronic sensors) Would China go along with a scam....just questions. I endorse no conclusions, but ask all to always use reason and analysis....
Officials Withhold Images of Photo Finish
http://www.nytimes.com/2008/08/17/sports/olympics/17fina.html?ref=sports
BEIJING — The international swimming federation said it would not release the official images of the finish of the Olympic men’s 100 butterfly, in which Michael Phelps beat Milorad Cavic by one-hundredth of a second.
A spokeswoman for Omega, the official timekeeper for the Beijing Games, initially told The New York Times on Saturday that it would release the images but said later that the swimming federation, known as FINA, would not allow it.....
"How is it that the official timekeeper of the event is the same company that sponsors Phelps since 2004? Isn't there a clear conflict of interest here? And why are leading FINA officials unashamedly and brazenly the biggest cheerleaders of Michael Phelps? We are not talking about NBC and other American-broadcasters who have clear interest in weaving the "narrative" in quest for the largest share of ratings, and for their economical ends, for purposes of appeasing to their advertisers who buy such overpriced ad slots.."
http://gawker.com/5037913/the-michael-phelps-gold-medal-conspiracy
Posted by NXNGRG at 7:17 PM

How much security contractor (Blackwater, etc) involvement is there in these "terror drills"? How much money is made by these companies?

There was actually no contractors there. The participants were all FBI, Fire, Police, and California Army National Guard (95th CST) I was there too so i'm not bs-ing.