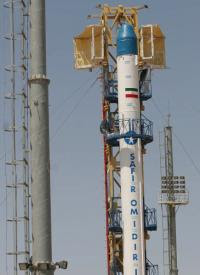 
IRAN says it has sent a rocket carrying a dummy satellite into space, triggering US concern that the technology could be diverted to ballistic missiles.
The launch is likely to intensify tension with the West over Iran's nuclear drive, which Washington and its allies say is a cover for atomic weapons ambitions.
The head of Iran's space agency, Reza Taghipour, announced the launch of the Safir (Ambassador) rocket on state television, adding that a test satellite had been put into orbit.
"We have paved the way for placing a satellite in space in future," state television said, showing images of the pre-dawn rocket launch, attended by President Mahmoud Ahmadinejad.
Western governments, already concerned over Iran's nuclear activities, say the technology used in the Islamic republic's space program could be diverted to military use, claims denied by Tehran.
NATO won't let Russia succeed in Georgia: Rice
http://www.breitbart.com/article.php?id=D92KT1180&show_article=1

Cross us and we will crush you, warns Medvedev
http://www.timesonline.co.uk/tol/news/world/europe/article4557369.ece
President Medvedev of Russia yesterday promised a “shattering blow” against any foreign power that moved against Russian citizens

Massachusetts companies brace for wind down in Iraq
http://news.bostonherald.com/business/general/view/2008_08_18_Massachusetts_companies_brace_wind_down_in_Iraq/srvc=home&position=6 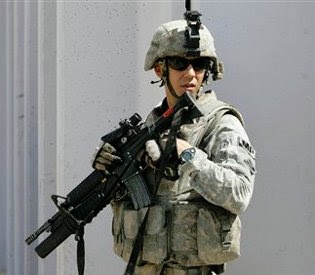 Massachusetts’ defense industry will be in retreat for a short period if the war in Iraq winds down after a new U.S. president takes command.
But analysts hope the Bay State’s diversified defense sector and high-tech concentration will help it play a key role in the country’s military future.
No one is predicting an immediate withdrawal of troops, equipment and spending in Iraq after a new president - whether he’s Democrat Barack Obama or Republican John McCain - is sworn in this January.
But defense industry experts and Wall Street analysts are already talking about what will happen if any type of reductions occur, whether it’s forced by domestic politics, battlefield necessity or a combination of the two.
Some analysts think the state’s defense industry - whose value was recently pegged in a University of Massachusetts report at about $14.7 billion a year - could take a 5 percent or more revenue hit if there’s a significant change.
That could lead to layoffs and other disruptions for firms making everything from missiles and robots to aircraft engines and other items used by GIs in Iraq.
Defense contracts in Massachusetts now support about 32,240 jobs, according to the recent UMass Donahue Institute study.
An additional 39,187 jobs are indirectly tied to defense-related research and supply-chain operations, the UMass report said.
“There will be some impact,” said Donald Quenneville, executive director of the Defense Technology Initiative, an offshoot of the Massachusetts High Technology Council.
Most major defense contractors would be affected - whether it’s Raytheon Co., which accounts for about 23 percent of all Pentagon contracts in Massachusetts, or smaller companies, such as Foster-Miller Inc., which holds less than 1 percent of the state’s defense-related contracts.
But industry sources are optimistic that Massachusetts would be less hard-hit than other states with big defense businesses - and in the long run the state could become an even bigger player in defense.
The reason for the optimism: the Pentagon’s aggressive commitment to modernize the U.S. military, as it prepares for the “next wars,” and the state’s well-regarded high-tech sector. 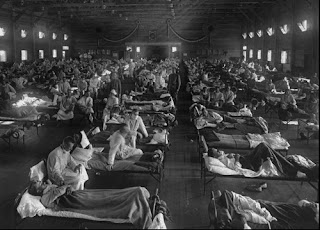 Writing about the 1918 influenza outbreak in the August issue of the journal Emerging Infectious Diseases, researchers reported that few deaths were swift, which is what scientists believed characterized a viral pandemic. Instead, they found most deaths occurred a week to two weeks later -- indicating the deaths were the result of opportunistic bacterial infections.Most of the bacteria recovered from patients, dead or alive, are common colonizers of the noses and throats of healthy people, according to coauthors Dr. John F. Brundage, a medical epidemiologist at the Armed Forces Health Surveillance Center in Silver Spring, Md., and Dr. G. Dennis Shanks, director of the Australian Army Malaria Institute in Queensland.
Both groups of researchers were trying to understand why the 1918 virus -- a novel strain of influenza for which few people had natural immunity -- was so lethal. The virus swept the globe, killing an estimated 50 million people, striking down young, healthy adults even though influenza usually kills the very young, the elderly and the chronically ill. 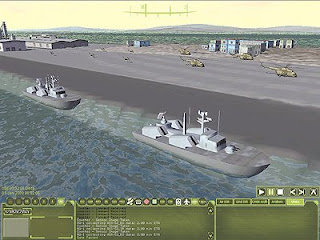 APL's National Security Analysis Department is developing a video-gaming technology that allows it to create simulations and rehearse complex missions for sponsors on desktop computers. The software — known as MOSBE for "modeling and simulation builder for everyone" — is the centerpiece of NSAD's efforts to strengthen its war-gaming analysis capability.
The MOSBE software provides an environment that helps military leaders rapidly create and test concepts, and quickly and easily modify and refine them before deploying them to trainees or developing requirements for a traditional simulation model. 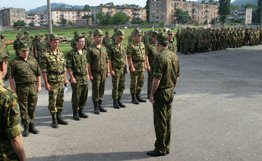 MOSCOW, August 18 (RIA Novosti) - Antiaircraft units from the Far East Military District start a tactical drill Monday at the Yeisk test site in southern Russia's Krasnodar Territory, a spokesman for the Russian Ground Forces said.
Col. German Zhitenev said the exercise, which runs Monday through Friday, will involve over 200 servicemen and more than 40 weapon systems.
The units will practice effective engagement of air targets with Shilka and Strela-10 antiaircraft missile systems, and Igla portable antiaircraft missile systems.
Troops will also rehearse movement and deployment into a target area, preparing for combat operations, coordination and interoperability.
Flu pandemic drill for financial institutions
http://news.asiaone.com/News/Latest%2BNews/Business/Story/A1Story20080818-82825.html
A simulation exercise to test financial institutions' contingency plans for a devastating flu pandemic will take place from Aug 28 to Sept 11.
It will centre on a staged flu outbreak on Sept 5 that will 'hit' more than 140 companies, including banks, insurers and stockbrokers. Also participating are the Monetary Authority of Singapore and the Singapore Exchange.
The exercise is being organised by the Association of Banks in Singapore (ABS) and aims to help ensure that the local financial sector is prepared should such a global catastrophe occur.
Three State departments to conduct evacuation drills
http://alwatan.com.kw/Default.aspx?MgDid=662938&pageId=473
KUWAIT: Three State departments have reviewed their programs for an evacuation drill in preparation for unforeseen emergencies.The drills, to take place on Tuesday at a shipping company, involve the Civil Defense Department (CDD), the Public Department for Firefighting (PDF) and the Medical Emergency Department (MED).
Israel, Turkey, U.S to conduct joint naval exercise
http://news.xinhuanet.com/english/2008-08/19/content_9493386.htm
In Show of Force, Brazil Goes to War Games in Defense of Newfound Oil
http://www.brazzilmag.com/content/view/9770/1/
Russia Invades Georgia: Defense Contractors Declare Victory
http://www.washingtonindependent.com/view/russia-invades
US proxy (Georgia) Invades .......
Navy Wants New Laser Weapons
http://www.military.com/news/article/navy-wants-new-laser-weapons.html?col=1186032310810
The Office of Naval Research held its annual partnership with industry conference this week here in Washington, DC. The envelope-pushing Navy lab is particularly keen on developing "game changing" laser beam and hypervelocity rail gun weapons. Much of the available funding is for early phase modeling and simulation. Some of ONR’s high-priority research areas include:
(continued...)
The Web Ushers In New Weapons of War and Terrorism
Protesters, terrorists and warmongers have found the Internet to be a useful tool to achieve their goals. Who will bring law and order to cyberspace?
http://www.sciam.com/article.cfm?id=web-brings-new-weapons-of-war