Like any team wanting to keep their skills sharp and improve, emergency crews held a training exercise at Offutt Air Force Base Saturday.
The mock drill included over 200 volunteers and nearly 100 emergency personal preparing for the unthinkable, a scenario they hope they never have to encounter.
if "You train for it just like this," said U.S. Air Force General Jim Jones. "The folks who are the first responders have to assess who are the most critical portion to take care of and what we can put off for later and by doing this it does reduce the adrenaline, it reduces the stress so they respond without panic."
Medical technician Layla Gregory was one of the first responders. "I think it's better preparing me for a major disaster and it's also fun to come out here and do this kind of stuff too, so it just keeps our skills up."
Volunteer “victim” Virgil Keller had a stomach gash and wounded leg. "I don't suspect in my play condition I wouldn't be hollering too much." He was glad it was only a drill. "I wouldn't want to be in this situation for real.”
Air Force Week starts August 9th culminated by the air show August 16th and 17th. Emergency personnel, including Lifeflight will be on hand for the show.
"Operation Purple Haze" 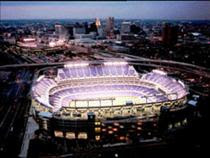 Drill teaches terror lessons
Mock disaster at M & T Bank Stadium draws 300 first-responders and 500 volunteers
http://www.baltimoresun.com/news/local/bal-md.security03aug03,0,6742288.story
A booming crack and a cloud of smoke from a small metallic device caused hundreds to scream, clutch their bodies and quickly head to the exits of M&T Bank Stadium yesterday. Soon, the parking lots outside the stadium were filled with flashing lights from firetrucks as emergency response workers tended to hundreds of disaster drill participants portraying ailing sports fans.The three-hour exercise, "Operation Purple Haze," gave 300 local first-response providers an opportunity to prepare for a terrorist attack involving a simulated nuclear weapon. Organizers stressed that the exercise was an attempt to be proactive, and not in response to any specific terrorist threat. "I am really excited about the number of people taking time out to take a proactive approach to making citizens feel safe," Mayor Sheila Dixon said shortly before the exercise began.
New DNA Technique Led Authorities to 'Anthrax Killer'
http://www.foxnews.com/story/0,2933,396627,00.html
(why can't balogna go to the grinder.....or no comment)
Posted by NXNGRG at 3:47 PM