Today the C-Span bus came to Burlington VT where a group of protesters
assembled - I had on an Uncle Sam hat and held the American Flag upside
next to a banner "Elections Are Fake'. Burlington is one of the more radical
and politically aware places in the US, yet , even by the majority here in my town, people have no clue what is going on - I find life in America to be a growing nightmare and see nothing but more insanity ahead. Anyone have any answers? (Will post protest photos if the BFP publishes protest coverage)

Police taser 950 members of the public in four years
http://www.telegraph.co.uk/news/newstopics/politics/lawandorder/2505309/Police-taser-950-members-of-the-public-in-four-years.html 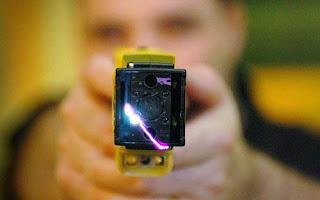 The Home Office said that its taser weapons could now be issued to all forces after a trial showed a sharp take up among officers who were not trained in the use of fire arms.
Overall figures show that tasers, which use electroshocks to cause temporary paralysis by attacking the sensory nerves, were drawn by officers on 2,662 occasions between April 2004 and the end of May this year.
On 834 occasions, the weapons were actually fired by officers while on another 115 occasions the taser was used to "drive-stun" when it is pressed against a person and fired like a cattle prod. .... 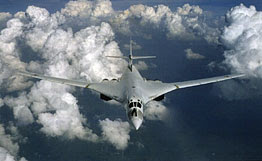 MOSCOW, August 5 (RIA Novosti) - Russian Tu-160 Blackjack and Tu-95 Bear strategic bombers will join the Russian navy in a series of exercises in the Indian Ocean, the Air Force commander said on Tuesday. (Russian strategic bombers - Image gallery)
"We are preparing the flights of our strategic aircraft to the Indian ocean to practice interoperability with the Russian navy task force in the region," Col. Gen. Alexander Zelin said.
A Defense Ministry source later confirmed that a joint exercise involving Russian strategic bombers and combat ships had been scheduled for the fall 2008.
The AF commander said that the Air Force had received orders to increase joint training with the Navy and the number of patrol flights across the world's oceans to ensure the security of Russian shipping in strategically and economically important zones.
Russia resumed strategic bomber patrol flights over the Pacific, Atlantic, and Arctic oceans last August, following an order signed by former president Vladimir Putin.
"Since August 2007, Russian strategic bombers have carried out about 150 patrol flights with tactical interference of foreign aircraft, which accompanied our planes on their missions and in some instances jeopardized the success of these missions," Zelin said.
Mobile Phone Technology Brings Robot Swarm To Research Labs
http://www.sciencedaily.com/releases/2008/08/080805155626.htm 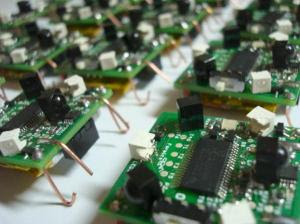 ScienceDaily (Aug. 5, 2008) — A new low cost platform for swarm robotics research which makes it possible to produce robots for as little as £24 each is being presented at the first European conference on Artificial Life which will be held in Winchester from 5-8 August.
The robots will be at a press preview of a special robot demonstration tomorrow Wednesday 6 August at 4.30pm.
At a presentation entitled Strategies for maintaining large robot communities on today, Alexis Johnson from the University of Southampton's School of Electronics and Computer Science (ECS) described how he and his fellow students developed a platform of 25 robots capable of more than two hours of autonomy and with sufficient code capacity and processing power to run complex algorithms. The other students were Stephen English, Jeffrey Gough, Robert Spanton and Joanna Sun.
The team employed motors normally used to vibrate mobile phones. These motors are designed to be attached to circuit boards in the standard manufacturing process---removing the need for manual assembly of the robots and bringing the cost of a swarm of robots within reach of a typical research project.
'This is truly exciting: now we can order robots from the same UK companies that regularly make circuit boards for our projects---for them it is just a circuit board they can mass-produce like any other, but actually it is a complete functional robot.' said Dr Klaus-Peter Zauner who teaches Biorobotics at ECS.
'This also poses important research questions: how can we maintain and control thousands of robots,’ he added. ‘The students have made first steps to answer this using software tricks inspired by the way bacteria exchange code for drug resistance.'
Swarm robotics platforms are used for the investigation of emergent behaviour. They permit the study of swarm behaviour by physical simulation: providing real world constraints and experimental scope unattainable in software simulation alone.....
SAIC to supply NGA with geospatial-intelligence products
http://www.washingtontechnology.com/online/1_1/33252-1.html
Science Applications International Corp. has won a $15.9 million contract to assist the National Geospatial-Intelligence Agency.
Under the agreement, SAIC will provide multiple data products to assist with global geospatial intelligence, the Defense Department said Aug. 4. The San Diego company will perform the work in Chantilly, Va., and St. Louis, DOD said.
SAIC integrates geospatial products and information that are used by warfighters and intelligence staff members for their daily activities or combat, according to the company’s Web site.
NGA is a combat support component of DOD that assists the secretary of defense, CIA director and other national policymakers in the areas of imagery, imagery intelligence and geospatial information.
SAIC ranks No. 5 on Washington Technology’s 2008 Top 100 list of the largest federal government prime contractors.
FalconStor and China Security & Surveillance Technology Partner to Deliver Data Protection and Continuity for Digital Video Surveillance
Companies Complement Digital Information and Storage Optimization Solutions with Joint Development and Marketing Initiatives
http://www.marketwatch.com/news/story/falconstor-china-security--surveillance/story.aspx?guid={2D0E3BC6-6486-4ACE-B2A5-C158B0662D6B}&dist=hppr
MELVILLE, N.Y., Aug 05, 2008 (BUSINESS WIRE) -- FalconStor Software, Inc. (FALC:
falconstor software inc com, the provider of TOTALLY Open(TM) data protection solutions, today announced a partnering agreement with China Security & Surveillance Technology, Inc. (CSST) (CSR: , to bring the efficiencies of SAN virtualization, storage provisioning, business continuity and storage management to the digital video security and surveillance market. As part of this agreement, the companies will collaborate to jointly address the worldwide market for digital video security and surveillance with co-development and co-marketing activities.
CSST engages in the manufacturing, distribution, installation, and maintenance of security and surveillance systems throughout China. Its customer base includes financial institutions, transportation facilities, telecommunication providers, and government agencies. The digital IP surveillance market is growing fast, and the data needs to be protected and recoverable. CSST identified FalconStor as the strategic partner able to provide a total storage solution for CSST's surveillance systems. ...
China's Tibet Holds Anti-Terrorism Exercises
http://www.istockanalyst.com/article/viewiStockNews+articleid_2476921&title=Chinas_Tibet_Holds.html
Lhasa, 5 Aug (ZXS) - On 2 and 4 August, the related departments of the Tibet Autonomous Region successfully held real-troop anti- terrorism drills code-named "Sky Road [Tian Lu] 08" and "Grand Hawk [Xiong Ying] 08" at Lhasa Train Station and Lhasa Gonggar Airport. ...
Pork Alert: Homeland Insecurity
CAGW's Pork Patrol(SM) takes a closer look at fiscal 2009 Homeland Security pork
http://www.marketwatch.com/news/story/pork-alert-homeland-insecurity/story.aspx?guid=%7B6895E444-A4C1-46B6-9710-3D546134AD73%7D&dist=hppr
Raleigh opposes proposed bio-defense lab
http://abclocal.go.com/wtvd/story?section=news/local&id=6308470
Stunning security idea from US
http://www.impactpub.com.au/micebtn/index.php?option=com_content&task=view&id=2255&Itemid=50
Tuesday, 05 August 2008
A US Department of Homeland Security (DHS) official allegedly has requested a proposal from the inventor of a ‘safety bracelet’ that doubles as a stun device.
According to a promotional video on youtube, the bracelet would be worn by all airline passengers and would hold: Similar information to that carried on a boarding pass; personal information about the traveler and would monitor the whereabouts of each passenger and his/her luggage.
It also would shock the wearer on command, completely immobilising him/her for several minutes.The Electronic ID Bracelet, as it’s referred to, would be worn by every traveller “until they disembark the flight at their destination.”
Posted by NXNGRG at 3:34 PM