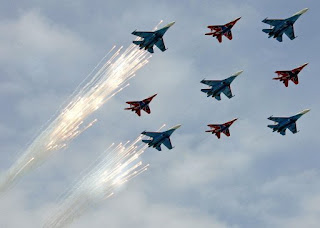 Nuclear missiles and tanks paraded Friday across Red Square for the first time since the Soviet era but new President Dmitry Medvedev warned other nations against "irresponsible ambitions" that he said could start wars.
Marching bands and 8,000 troops goose-stepped across the square, followed by a huge display of heavy weapons including Topol-M ballistic missiles and T-90 tanks, and a fly-by of warplanes.
Reviewing his first parade as commander in chief, Medvedev warned against "irresponsible ambitions" that he said could spark war across entire continents.
In an apparent attack on US foreign policy and Western backing for Kosovo's independence, Medvedev also criticised "intentions to intrude in the affairs of other states and especially redraw borders
CIA: China's military could get 'adversarial'
http://www.worldtribune.com/worldtribune/WTARC/2008/ea_china0124_05_09.asp
China’s rise is posing serious challenges and its military buildup and international behavior could produce an “adversarial” relationship with the world, CIA Director Michael V. Hayden said last week.
“After two centuries of perceived Western hegemony, China seems to be determined to flex its muscles,” Hayden said. ...
Generals address Minot Airmen
http://www.af.mil/news/story.asp?id=123098100 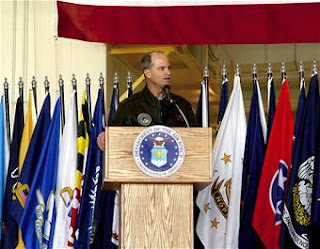 Gen. Kevin P. Chilton addresses more than 1,000 5th Bomb Wing Airman May 2 at Minot Air Force Base, N.D. General Chilton is the U.S. Strategic Command commander. (U.S. Air Force photo/Airman 1st Class Jesse Lopez)
5/9/2008 - MINOT AIR FORCE BASE, N.D. (AFPN) -- Two Air Force generals spoke to more than 1,000 5th Bomb Wing Airman May 2 here to remind them of their mission's importance to the nation and to motivate them for an upcoming Defense Nuclear Surety Inspection. Gen. Kevin P. Chilton, the commander of U.S. Strategic Command, and Gen. John D.W. Corley, the commander of Air Combat Command, visited the base to meet with Minot Air Force Base Airmen and let them know how critical each Airman is to the Air Force. They were joined in the visit by Lt. Gen. Robert J. "Rob" Elder Jr., the 8th Air Force commander, and Navy Rear Adm. Doug McClain, the STRATCOM director of global operations. The leaders addressed the crowd with a B-52 Stratofortress serving as a backdrop. "Showing the world that we are ready and able to do our mission is absolutely essential for the nuclear deterrence force," General Chilton said. "That overall deterrence mission is such a big part of the U.S. Strategic Command. We signal our deterrence, we signal our strength and we use our bomber force to signal our displeasure. The amount of firepower we have here should give our enemies pause. You are the muscle of our deterrence force." There are two parts to this deterrence force -- the power of our capabilities and the will to demonstrate this force, General Chilton said. "Your attitude should be, 'Just bring it!'"....
Motorola Trials TETRA Network Underground War Game Simulation within the Wieliczka Salt Mine in Poland
http://internetcommunications.tmcnet.com/topics/broadband-mobile/articles/27607-motorola-trials-tetra-network-underground-war-game-simulation.htm
Providing a secure radio network both on surface and underground in a war game simulation as part of the “Freedom and Security” conference in Poland, Motorola (News - Alert) has announced its trial of a TETRA (TErrestrial Trunked RAdio) communications network in Poland within the chambers of the Wieliczka Salt Mine, 130 meters underground. Motorola has announced that the critical communications network has been pushed to the extreme in this test.
Army Post Stages Mock Drill (KY)
http://www.newschannel5.com/Global/story.asp?S=8292859
FORT CAMPBELL, Ky. - Fort Campbell staged a mock terrorist attack Thursday morning to give fire and emergency crews training for such an event.
In the scenario, a car bomb containing weapons of mass destruction exploded. Dozens of people injured.
It was designed to give first responders experience in rescuing and treating the wounded.
They also had to be on the lookout for chemical and biological weapons.
Training coordinators said the exercise is important because military posts could be targets for terrorists....
Phase two of Multinational Experiment 5 kicks off (USJFCOM)
http://www.jfcom.mil/newslink/storyarchive/2008/pa040908.html
The second major experimentation phase of Multinational Experiment 5, an experimentation campaign plan led by U.S. Joint Forces Command and conducted with multinational experimentation partners, kicked off this week in Enköping, Sweden. (cont...)
Quarantined train to be rolling soon, official says: CA (Psyop Watch)
http://www.cnn.com/2008/WORLD/americas/05/09/canada.train/
Train Death And Series Of Illnesses Unrelated Says Chief Medical Officer Of Health http://www.citynews.ca/news/news_22540.aspx
Train emergency drill set for Yonkers' Glenwood Station Saturday
http://lohud.com/apps/pbcs.dll/article?AID=/20080508/NEWS02/805080526/-1/SPORTS
YONKERS - If it looks like something is seriously awry near the Glenwood Station Saturday morning, don't fret.
Metro-North Railroad, the Metropolitan Transportation Authority and the city of Yonkers will conduct an emergency drill starting at 9 a.m., playing out a scenario in which an MTA police officer's radiation detective device is set off as he passes a customer
Stroger scheduled to attend bioterror drill at Sears Centre
http://www.dailyherald.com/story/?id=188044&src=1
"More than 25 fire, police and emergency departments will participate in the drill to practice their response to an outbreak of the fictitious "Spring Fever Disease."
U.S., Chile to hold joint military exercises
http://news.xinhuanet.com/english/2008-05/09/content_8136002.htm 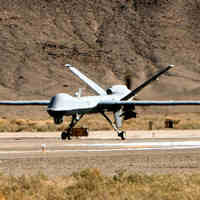 CREECH AIR FORCE BASE, Nev. (AFPN) -- Lt. Gen. Norman Seip, the 12th Air Force (Air Forces Southern) commander, congratulated Airmen at Creech Air Force Base May 6 as the 432nd Wing marked its first year as the Air Force's only MQ-1 Predator and MQ-9 Reaper unmanned aerial vehicle wing.
"The 432nd Wing has grown exponentially over the last year, in manpower, demand, flying hours, sorties, technology, reach, support for the warfighter and in battlefield capability," said General Seip. "From day one, the 432nd Wing Airmen have been 'all in' in the support of ongoing operations; particularly in operations Iraqi (Freedom) and Enduring FreedomPreparedness drill sparks controversy
The US: Your masters of the universe
http://www.atimes.com/atimes/Front_Page/JE09Aa01.html

Preparedness drill sparks controversy
http://www.chicagotribune.com/news/chi-ap-il-offensivedrill,0,7958764.story
IRVING, Ill. - The Council on American-Islamic Relations is crying foul over an emergency preparedness drill targeting a simulated mosque in the central Illinois commuity of Irving. Ahmed Rehab of the Chicago chapter of the Council on American-Islamic Relations says the exercise wrongly typecast Islamic houses of worship as security threats. Rehab says he has no reason to believe the exercise was meant to be malicious, but it still perpetuates a stereotype linking all Muslims to terrorism
Blue Brain Project
Blue Brain Project to unlock secrets
http://www.theaustralian.news.com.au/story/0,25197,23666493-30538,00.html
Markram plans to ramp up the simulation through an international collaboration, riding the escalator of Moore's Law, until an entire human brain is recreated in silico. If the plan works, this so-called Blue Brain Project will model 10 trillion synaptic connections. The hope is that the swirling activity in the simulation will display all the features of real brains, including whatever it is that generates the conscious mind. It would then be reasonable to suppose that the simulation itself is in some sense conscious, thus realising the dream of "artificial intelligence".
Posted by NXNGRG at 4:18 PM