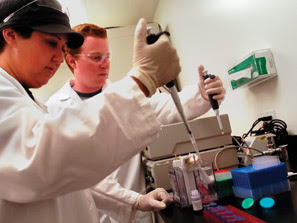 The government’s program to defend the country against bioterrorism attacks has become embroiled in a lobbying war, as rival biotechnology companies seeking hundreds of millions of dollars in contracts turn to influential K Street hired guns.
The Bush administration’s $5.6 billion Project BioShield has come under heavy criticism in the wake of contracting problems that led to delays in the purchase of vaccines designed to protect against biological weapons.

A key factor in the program’s problems, say critics, was the heavy lobbying push by Emergent BioSolutions that helped to derail a promising anthrax vaccine being produced by a rival. The competitor, VaxGen, eventually lost its $877 million government contract and was forced to sell its formula. The buyer, announced last week, was Emergent.
Immediately after its purchase was announced, Emergent sought and received a 60-day extension to apply for the new vaccine contract to produce 25 million doses of anthrax vaccine, valued at an estimated $500 million.... 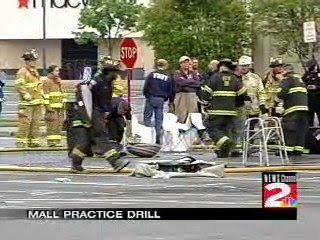 NEW HARTFORD - A practice drill at Sangertown Square Mall this weekend had a lot of people worried that it was the real thing.It was a multi-agency response drill, and teams from New Hartford, Utica, and Willowvale participated.

Sunday, the practice scene was an active shooter and a chlorine bomb simulation. Teams practice both response and decontamination.
The Police Department intends on conducting more multi-agency exercises in the future......

Glaxo Wins Approval to Sell Pre-Pandemic Flu Vaccine
http://www.bloomberg.com/apps/news?pid=20601085&sid=aVYYmgV9JWGQ&refer=europe
May 19 (Bloomberg) -- GlaxoSmithKline Plc, Europe's largest drugmaker, won European Union permission to sell its pre-pandemic flu vaccine, the first approval in the region of a shot to prevent an outbreak sparked by the deadly bird flu virus.
The vaccine, called Prepandrix, was cleared for sale in 29 countries to protect people against the virus before or at the beginning of a pandemic, London-based Glaxo said today in an e- mailed statement. The European regulator's advisory panel recommended adopting the product in February.
``This is a vaccine that can be produced in advance of a pandemic, that can be stockpiled ahead of a pandemic, which really allows governments to be ready in the event of a pandemic,'' Emmanuel Hanon, director and vice president of the influenza vaccine franchise at Glaxo's GSK Biologicals in Rixensart, Belgium, said in a telephone conference with reporters on May 14.
Governments are trying to prepare for a possible pandemic caused by the fatal H5N1 strain of bird flu that has spread across Asia to Africa, the Middle East and Europe since 2003. Makers of the vaccines are seeking a share of a $1 billion to $2 billion potential market, analyst Andrew Fellows of Helvea in London said last year.
Glaxo has invested about $2 billion in flu vaccine manufacturing capacity and is going to double production at factories in Germany and Canada to 120 million doses at each site, Hanon said.


Nanorobots to improve health care ( or wreak havoc as military weapon?)
http://blogs.zdnet.com/emergingtech/?p=927
Using nanorobots to deliver drugs and fight diseases is not a new idea (check here or there). Of course, nanorobots floating inside our bodies to improve our health are still years away. However, an international team of American and Australian researchers is developing a nanorobot hardware architecture for medical defense (PDF format, 1.02 MB). They have developed a nanorobot control design (NCD) software which helps them to simulate the behavior of these future nanorobots. Their 3-D approach shows ‘how nanorobots can effectively improve health care and medical defense and should enable innovative real time protection against pandemic outbreaks.’ But read more…


New Mid-infrared Lasers Show Doubled Efficiency (DARPA)
http://www.sciencedaily.com/releases/2008/05/080519165935.htm
ScienceDaily (May 19, 2008) — Researchers at the Center for Quantum Devices at the McCormick School of Engineering at Northwestern University have recently doubled the efficiency of infrared lasers under the U.S. Defense Advanced Research Projects Agency’s Efficient Mid-wave Infrared Lasers (EMIL) program.
As these types of lasers become more efficient, they could be used in next-generation laser-based defense systems to fool incoming missile attacks or detect explosives or toxins in the atmosphere. Such lasers could also be used in commercial applications like trace chemical analysis, pollution monitoring, and free space communication.
Posted by NXNGRG at 2:36 PM