OEM Practices Emergency Drills (although a "weather" drill, could be a cover for a FF)
http://www.wdtv.com/news/local/18703929.html 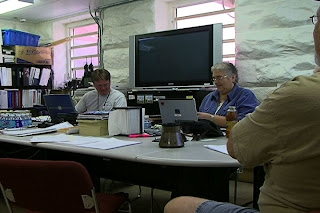 Upshur County is just one area in the state to participate in this FEMA national level exercise. Offices in Washington DC, Virginia, Maryland and Pennsylvania are also included in the exercise for the next three days.
Here in West Virginia they're evaluating local administrative capabilities in response to a mass evacuation from the Washington DC area due to a hurricane.
As part of the exercise, officials in Upshur County are examining shelter capabilities for evacuees by researching spare capacity of nursing homes, assisted living facilities, prisons and hospitals.
They're also reviewing contracts, or lack thereof, for emergency fuel, water and debris removal.
Officials with the Office of Emergency Management say this is a great way to get themselves prepared if such a disaster should ever occur. 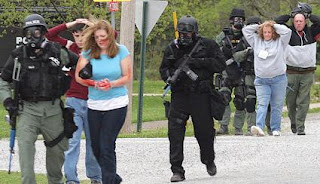 Members of the Illinois Law Enforcement Alarm System (ILEAS) lead suspects away during Thursday's emergency drill in Irving. Journal-News/Mike Plunkett[slideshow:420:220:4]-->
For the purpose of Thursday night's emergency exercise drill, the Continuing Recovery Center in Irving had become Irving Mosque, the home-base for a radical, heavily armed group with suspected terrorist ties.There were explosions outside and inside the building. Illinois Law Enforcement Alarm System (ILEAS) special forces stormed the "mosque" from an armored car.There were casualties.Hostages had been taken and suspects were killed. One hostage hooked up to an explosive devise, required services from the Illinois Secretary of State bomb squad. Suspects also released nerve gas, summoning the Montgomery County HazMat team.There were participants from local law enforcement, fire departments, ambulances, and critics to judge the drill. In all, over 120 individuals from nearly 30 agencies. 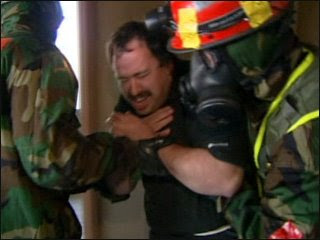 FORT LEWIS, Wash. -- After being criticized for its slow reaction time to Hurricane Katrina, the federal government put the lessons learned to the test on Monday. At Fort Lewis more than a thousand people participated in a drill to see whether federal officials have learned how to speed up the process of getting to the people in need. The scenario was this: the Alaskan Way Viaduct had been hit by an explosion and a chemical truck full of deadly gas had burst. Specially-trained Marines moved through the crowd, looking for victims of a terrorist attack as looters ran rampant. Some victims were willing to be helped while others barricaded themselves indoors, fearful of the looters and the people in masks. .... 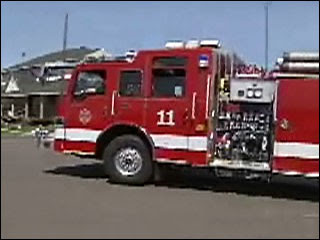 "This is just the first of three days of mock disaster drills this week. Crews from Eugene and Springfield are running a half dozen different disaster scenarios"

* possibly tied to the NLE taking place, as in 9/11, the smaller (secret) drills were the op itself.