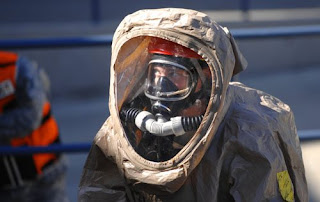 BLOOMINGTON -- U.S. Cellular Coliseum was the site of a practice session Wednesday, but the professionals weren’t using hockey sticks or footballs and wore very different kinds of protective gear.

Twenty-two members of the Bartonville-based Illinois National Guard 5th Civil Support Team were being evaluated during a formal training exercise simulating a hazardous event at the Coliseum. Guardsmen were clad in hazardous materials suits, and an array of emergency trucks and trailers filled a lot northwest of the building.In Wednesday’s scenario, a “dissident group” attacked people attending a volleyball match the night before, said Lt. Col. Larry Ritter, from U.S. Army North in Fort Sam Houston, Texas.

Offutt, Bellevue hope to land Air Force Cyber Command
http://www.southwestiowanews.com/site/news.cfm?newsid=19704096&BRD=2703&PAG=461&dept_id=627131&rfi=6
A high-speed fiber-optic network, high-tech workers and ample security top the Air Force's wish list for the home of its new Cyber Command, which Nebraska and 17 other states are bidding to land.

Pandemic Drill At Washburn University; "A Success"
http://www.wibw.com/home/headlines/19183939.html
An anthrax scare is the pandemic drill held Thursday afternoon on the campus of Washburn University.
It was a real life look at what to do in a mass emergency where thousands would need immediate care.
Imagine a situation of panic, desperation and confusion, a drill of those that ingested anthrax through food was put to the test.

County officials and volunteers drill with emergency equipment (AZ)
http://www.douglasdispatch.com/articles/2008/05/22/news/doc48348fe34a5d8598213671.txt
SIERRA VISTA — In case of emergency, disaster or an epidemic, local emergency workers won’t be the only ones prepared to help.About 20 local volunteers learned how to turn 700 pounds of canvas, metal and plastic into an emergency shelter Saturday.The Base-X shelter structure, a new $28,000 county purchase with funds from the Centers for Disease Control, is a large tent that could be used for sleeping, surgery and many other emergency needs, said Maureen Kappler, spokeswoman for the drill and public health nurse for Cochise County.

About Steve BalzacSteve Balzac started designing serious live roleplaying games over 25 years ago, as an undergraduate at MIT. He has over two dozen major games to his credit, most recently including a Pandemic Flu Simulation for the US National Capitol Region. His games have ranged in length from two hours to two weeks, and in size from eight to over two hundred participants. They are noted for their richness of detail, depth of characterization, intricate plotting, and carefully-designed, easy-to-use mechanics. Players become immersed in the game scenario, acting and reacting in highly realistic ways, and building transferable skills in negotiation, communication, public speaking, leadership, teamwork, flexible planning, and crisis management. His articles have appeared in Metagame, The Journal of Interactive Drama, The IBM Systems Journal, The Lincoln Journal, Mass High Tech, and the Worcester Business Journal. 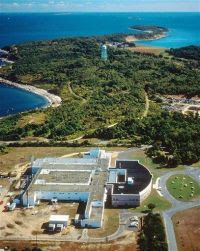 WASHINGTON (AP) — One of the nation's oldest farm groups said Thursday a proposed foot-and-mouth disease research laboratory on the U.S. mainland, near livestock, could be an inviting target for terrorists. Commercial livestock representatives and the Bush administration insisted it would be safe to move an island lab to sites near animals....

Lockheed's 'Spooky Radar' Gets U.S. Patent
http://blog.wired.com/defense/2008/05/lockheeds-spook.html
The ability to propagate radar signals at frequencies that are independent of the resolution frequency may allow quantum radar system 100 to attain near zero attenuation rates in the atmosphere, and greatly diminished attenuation rates in other media including foliage, building materials, earthen layers, etc. Quantum radar system 100, thus, can be adapted to visualize useful target details through background and/or camouflaging clutter, through plasma shrouds around hypersonic air vehicles, through the layers of concealment hiding underground facilities, IEDs, mines, and other threats--all while operating from an airborne platform or other suitable platform. Quantum radar system 100 may also improve the performance of advanced image processing and pattern recognition systems, as well as defeat most RF signature management systems when the propagation frequency is tuned to the resonant wave length of the target.


Riddle Me This, General Dynamics (military robotics )
http://www.fool.com/investing/high-growth/2008/05/22/riddle-me-this-general-dynamics.aspx
Posted by NXNGRG at 3:15 PM