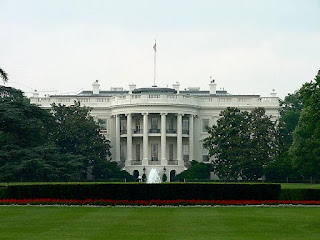 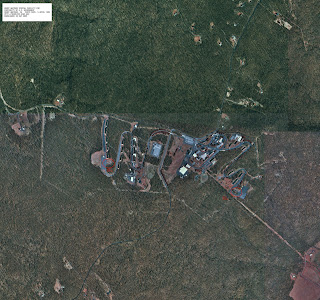 Thousands of key federal employees are being whisked from the Washington area by helicopter and car for a three-day test of their ability to run the government from remote locations during a disaster.
The exodus, which began yesterday and will continue today, involves the White House and other parts of the executive branch. Congress and the judiciary are not part of the exercise, which is being overseen by the Department of Homeland Security.
Since the late 1990s, every federal agency has been required to have a plan to quickly resume operations after a catastrophe. But the response to the Sept. 11, 2001, terrorist attacks raised doubts about many agencies' preparations.
This week's "continuity of government" drill is one of the largest by the federal government since 9/11, officials said. It is part of a national eight-day exercise in which officials are responding to a cascade of nightmarish events. The drill started Thursday, with terrorists sabotaging a tanker carrying poisonous gas in Washington state.
Next, suspected nerve gas was accidentally released from a government stockpile in Oregon. The disaster script also calls for a devastating Category 4 hurricane to roar up the East Coast toward the District, where officials will be getting word of a terrorist threat to the capital.
Officials leaving the Washington area will work from temporary offices in Virginia, West Virginia and Maryland for periods ranging from a few hours to two days. Others will work from home.
Russ Knocke, a Homeland Security spokesman, said thousands of employees will take part in the exercise. Plans call for a mandatory evacuation of the Washington region before "Hurricane Zoe" strikes at 1 a.m. Thursday.
Knocke would not say which senior officials are participating. President Bush will not be working from a remote location, but other White House officials will, said Scott Stanzel, deputy White House press secretary.
"I'm not going to be able to detail who those officials are," he said.
The roles of Cabinet secretaries in remote locations will be played by their underlings in some cases.
The out-of-town sites used in the exercise will include Mount Weather, a Cold War-era bunker on the border of Loudoun and Clarke counties that has been used in recent years as an operations center by the Federal Emergency Management Agency, officials said.
Critics have derided FEMA in recent years for including functions such as patent processing as an "essential" service to be restored after a catastrophe.
But Paul C. Light, a professor of government at New York University's Wagner Graduate School of Public Service, applauded officials for organizing the drill.
"At least they're doing exercises," he said. "It's not enough to design plans; you have to practice."
FEMA is running the hurricane part of the exercise. Washington, Maryland and Virginia officials "are involved but not playing full-scale," said Chris Geldart, who heads Homeland Security's office for the National Capital Region.
Most residents won't notice anything unusual during the hurricane exercise, because much of it is "tabletop" -- involving discussions of plans rather than deployments of first responders. But hotels a few hours outside Washington may be unusually full of visitors who are clearly not tourists.
PUBLIC SAFETY [SIC]
Crews deal with fake explosion in terror drill
Mock emergency involves students, several agencies
http://www.bellinghamherald.com/102/story/402462.html 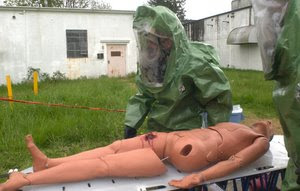 Emergency responders rush a dummy with simulated wounds into a decontamination setup at Camp Horizon in Birch Bay, as part of a terrorism response exercise on May 6, 2008. The drill part of National Level Exercise and was held across Whatcom County. The exercise tested local, state and federal responses to a national disaster.

The mood was jovial Tuesday afternoon as military personnel moved “bloodied” local high school students and dummies through a decontamination tent at the Northwest Washington Fair and Events Center.
But officials say their experiences during the drill will come in handy if a major terrorist attack or natural disaster actually hits Whatcom County.
“You can never be too prepared for any disaster, whether manmade or otherwise,” County Executive Pete Kremen said, citing Whatcom County’s proximity to earthquake fault lines, a petroleum pipeline, two oil refineries and Mount Baker, a dormant volcano.
Hundreds of troops from the U.S. Marine Corps and U.S. Army North joined state and local emergency responders dealing with a fake explosion of a tanker truck full of toxic chemicals, pretending it injured hundreds.
If the incident occurred in real life, St. Joseph Hospital would be overrun with patients and local officials could be forced to call the state National Guard or federal military. The goal of the drill was to help local agencies learn when to make that call and how to work with their federal and state counterparts.
The drill also was an opportunity for the U.S. Marine Corps Chemical Biological Incident Response Force to practice its training. Lt. Cmdr. Kevin Kelley said the last time the 350-Marine force responded was 2004, when ricin was discovered in the office of then-Senate Majority Leader Bill Frist. ...

Return of the Bears (Russian Bombers)
http://www.theglobeandmail.com/servlet/story/RTGAM.20080504.wrussians0504/BNStory/National/home
The call came in to the air force field in Inuvik in the Northwest Territories: Unidentified aircraft approaching Canada's Arctic.
“You get airborne as fast as you can,” says the CF-18 pilot, identified by his call sign — Nojo. “You end up running to the jet.”
Less than 30 minutes later, somewhere high above the Arctic Ocean, Nojo and his fellow pilot identified the intruders: multiple “Bears,” long-range Russian bombers, 130 kilometres from Canadian airspace and closing fast.

Hoffman Estates seeks volunteers for bioterrorism drill (IL)
http://www.chicagotribune.com/news/local/chi-help-bigdrill-both-08-may08,0,2434278.story
Hoffman Estates officials are looking for 2,000 to 3,000 volunteers next week to participate in a bioterrorism exercise in return for department store coupons and tickets to an indoor football game.The volunteers are needed for a large-scale drill, planned for Tuesday at the Sears Centre arena, 5333 Prairie Stone Pkwy., to test how medicine would be distributed to victims of a public-health emergency....

National Guard To Hold WMD Drill (PA)
http://www.wgal.com/news/16190785/detail.html
The Pennsylvania National Guard will hold a weapons of mass destruction response exercise in Lancaster County on Thursday.
The drill, dubbed Red Rose III, will happen at the Lancaster County Public Safety Training Center in Manheim from 7 a.m. to 4 p.m. It will involve nearly 400 people from 30 different organizations.
The Guard said the exercise will "test such areas as initial response, search and rescue, evacuation, crime scene preservation and mass decontamination."

New emergency centre on the way: Canada
http://www.canada.com/calgaryherald/news/city/story.html?id=2db71394-5dd3-4fff-a853-468d3e5e794f
Calgary will soon break ground on a new emergency operations control centre, as it works to improve its response in a major crisis...
Calgary's emergency management department is also undertaking a comprehensive risk analysis on how to best deal with emergencies -- from a sour gas well explosion to a flu pandemic...

The value of space-based intelligence
http://news.bbc.co.uk/2/hi/americas/7386786.stm

Raytheon tailors 'Iron Man' suit for warfightersU.S. soldiers soon may be suiting up in wearable robotic armor http://www.washingtontechnology.com/online/1_1/32754-1.html
Posted by NXNGRG at 4:31 PM