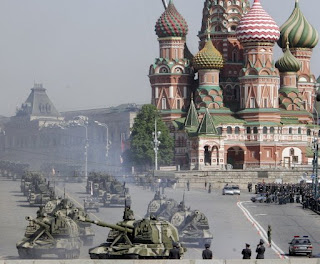 Russia's use of heavy weapons at this week's World War II commemoration parades is not intended as a threat to any nation, President Vladimir Putin said on Monday.
"For the first time in many years heavy military equipment will be used. This is not sabre-rattling. We are not threatening anyone and don't plan to," Putin said ahead of the traditional Victory Day parade on Friday.
"This is a demonstration of our growing defence capability.... We are capable of defending our people, citizens, our state, our wealth, which is not small," he said......

Russian bombers are again regular visitors along Canadian and US airspace
http://canadianpress.google.com/article/ALeqM5gbysbd6mPUBmedjwECuUXSIOcJ5g The call came in to the air force field in Inuvik in the Northwest Territories: Unidentified aircraft approaching Canada's Arctic.
"You get airborne as fast as you can," says the CF-18 pilot, identified by his call sign - Nojo. "You end up running to the jet."
Less than 30 minutes later, somewhere high above the Arctic Ocean, Nojo and his fellow pilot identified the intruders: multiple "Bears," long-range Russian bombers, 130 kilometres from Canadian airspace and closing fast.....
China: Let The War Games Begin
http://www.investors.com/editorial/editorialcontent.asp?secid=1501&status=article&id=294621907182546
Military Superiority: While the focus is on Iranian and Syrian nuclear activities, China quietly builds an underground submarine base on Hainan Island. Its purpose is to challenge U.S. naval supremacy and to fight and win a nuclear war. (continued...)
Good News for Army's Troubled 'Future'
http://blog.wired.com/defense/2008/05/good-news-for-f.html 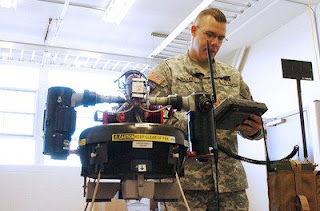 There's some much-needed good news for the Army's oft-troubled digital reboot, Future Combat Systems. The networks and radios at the heart of the $200 billion effort to make tomorrow's fighting forces lighter, quicker, and better able share data passed their "first major test," according to the military.
Well, "kinda," our own David Axe reports for Wired.com. Thanks to the new gear, FCS "robots spotted [a simulated terrorist] van; their targeting data bounced to a nearby unit of specially-equipped Humvees, then across the network to an Air Force intelligence cell in Langley, Virginia, then back to the B-52 -- all in just seconds. The bomber simulated dropping a guided bomb to 'destroy' the van."
Billions for Pentagon Failures
﻿In 1995, Army Maj. Gen. Robert H. Scales was playing war games in order to determine what military combat might look like in 25 years. In the process, he created "Future Combat Systems," a weapons system made up of unmanned ground and air vehicles that would be directed by computers at an Army base.Thirteen years later, the technology to realize Scales' vision still isn't available. That hasn't stopped the Pentagon from spending more than $20 billion for Boeing, SAIC and 550 other contractors and subcontractors to work on "Future Combat Systems." The original contract estimated the total cost at $15 billion....
America's Chemically Modified 21st Century Soldiers
http://www.alternet.org/story/84178/
Robotic bugs set to invade the battlefield
http://www.telegraph.co.uk/news/newstopics/frontline/1924773/Robotic-bugs-set-to-invade-the-battlefield.html

A swarm of robotic insects is being developed for the military to hunt down enemy fighters in buildings and caves, carry mini bombs and identify chemical, nuclear or biological weapons.

They look as though they have crawled from the set of a science fiction film, but the bugs are based on the design and size of real insects, including spiders and dragonflies.
They are to be fitted with cameras, as well as sensors to identify different types of weapon, and can be kitted out with a small payload of explosives.

Washington first responders in disaster drill (NLE update)http://seattlepi.nwsource.com/local/6420ap_wa_disaster_training.htmlOLYMPIA, Wash. -- Washington is participating in a national training exercise to coordinate local, state and federal agencies in the event of terrorism or a natural disaster.
In Monday's scenario conducted through Fort Lewis, attackers blow up a chemical plant near the Alaskan Way Viaduct in Seattle and a secondary blast kills first responders. Only a drill.
The National Level Exercise started Thursday and concludes next week. Two other scenarios are a deadly tanker crash in Whatcom County and a toxic release at the Umatilla Chemical Depot in northeast Oregon.
State Emergency Management Division spokesman Rob Harper says the state is activating its emergency operations center as part of the exercise.
Participants include the National Guard, FEMA and Homeland Security 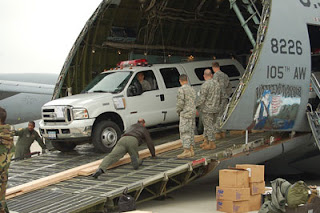 STEWART AIRPORT - New York National Guard members took part in an exercise Friday that entailed transporting cargo and soldiers by air and by land in the event of a man-made or natural disaster in New York City, and the 105th Airlift Wing at Stewart Air National Guard base played an important role in that exercise.
The ANG base in Newburgh would serve as a landing base for soldiers and cargo coming from other Army and Air National Guard bases around the state, in the event of a situation in an urban area like that of New York City...
* Both alleged hijacked flights on 9/11 (175 & 11) crossed paths over Stewart base...see Team8plus for more....
India’s missile programme
http://thepost.com.pk/OpinionNews.aspx?dtlid=159519&catid=11
India is emerging as a major player on the global stage and to sustain this ambitious role, it is developing at feverish pitch its armed arsenal – both nuclear and conventional. The country has registered annual growth rate of nine percent since last decade. Its foreign exchange reserves at $ 150 billion are at an all time high and its exports have crossed $ 50 billion, despite appreciation in Indian rupee’s par value vis-à-vis US dollar. Today dollar is exchanged at 40 Indian rupees...
NGA more than Mapquest for the military
http://www.wtop.com/?nid=251&sid=1398237
WASHINGTON - Deadly, pre-dawn missiles that have killed numerous al Qaida operatives are guided by "it."
Hundreds of thousands of deployed U.S. military service personnel don't dare make a move without "it."
Every single one of the intelligence community's field operatives around the globe depends on "it."
The entire military's air fleet is grounded without "it." Not one Navy nor Coast Guard vessel is allowed to leave port without "it."
Without "it," the president cannot make key national security decisions to protect the nation.
"It," is a geographic coordinate and "it" comes from the National Geospatial Intelligence Agency.
(cont...)
Homeland Security to test high-tech buoys
http://www.usatoday.com/news/nation/2008-05-04-buoys_N.htm
Who should MDs let die in a pandemic? Report offers answers
http://ap.google.com/article/ALeqM5hDeWu9n8WS9LtmwUnxMIucnFdnKQD90F8KKG0
The suggested list was compiled by a task force whose members come from prestigious universities, medical groups, the military and government agencies. They include the Department of Homeland Security, the Centers for Disease Control and Prevention and the Department of Health and Human Services...
Pentagon green-lights Lockheed Martin missile program
Pentagon gives Lockheed Martin go ahead on Air Force cruise-missile program
http://money.cnn.com/news/newsfeeds/articles/apwire/f9025c0b9c29aabf254e8bbe8270859a.htm
Posted by NXNGRG at 3:28 PM