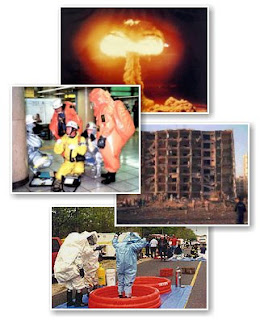 CHICAGO – Physicians and nurses from hospitals throughout the Chicago area will experience the chaos, confusion and stress of treating a large group of severely injured patients all at once in a unique simulation lab training program at Rush University Medical Center on Wednesday, May 28.The goal of the program is to prepare emergency department personnel from hospitals, large and small, on managing an influx of victims brought in from mass casualty events.The workshop, which will be held in the Rush University Simulation Laboratory, will focus on creating a realistic, potential situation where a trolley full of passengers explodes and the glass windows of the trolley are blown out as it pulls up to the entrance of Navy Pier on Labor Day. There will be numerous, life-sized computer-controlled ‘virtual patients’ set up to simulate the types of patient cases the trainees may need to triage during a mass casualty scenario. These simulators have life-like human functions that enhance training. They are capable of simulating any possible human medical or traumatic emergency such as loss of limb from a blast injury, penetrating wounds due to the flying glass, open head injuries, penetrating leg injuries, blunt injuries to the head, chest and abdomen, and much more. All 12 simulators will be programmed individually to survive or expire based on the timely interventions of the participants and the severity of the injuries incurred.“The purpose of the exercise is to overwhelm the emergency department personnel with the quantity and severity of casualties with limited time and resources,” said Dr. Phillip A. Jacobson, pediatric critical care physician, Rush University Medical Center 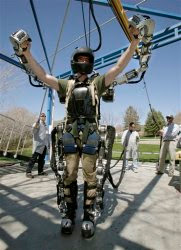 Rex Jameson bikes and swims regularly, and plays tennis and skis when time allows. But the 5-foot-11, 180-pound software engineer is lucky if he presses 200 pounds—that is, until he steps into an "exoskeleton" of aluminum and electronics that multiplies his strength and endurance as many as 20 times.
With the outfit's claw-like metal hand extensions, he gripped a weight set's bar at a recent demonstration and knocked off hundreds of repetitions. Once, he did 500.
"Everyone gets bored much more quickly than I get tired," Jameson said.
Jameson—who works for robotics firm Sarcos Inc. in Salt Lake City, which is under contract with the U.S. Army—is helping assess the 150-pound suit's viability for the soldiers of tomorrow. The suit works by sensing every movement the wearer makes and almost instantly amplifying it.
The Army believes soldiers may someday wear the suits in combat, but it's focusing for now on applications such as loading cargo or repairing heavy equipment. Sarcos is developing the technology under a two-year contract worth up to $10 million, and the Army plans initial field tests next year.
Before the technology can become practical, the developers must overcome cost barriers and extend the suit's battery life. Jameson was tethered to power cords during his demonstration because the current battery lasts just 30 minutes.
But the technology already offers evidence that robotics can amplify human muscle power in reality—not just in the realm of comic books and movies like the recently debuted "Iron Man," about a wealthy weapons designer who builds a high-tech suit to battle bad guys.
"Everybody likes the idea of being a superhero, and this is all about expanding the capabilities of a human," said Stephen Jacobsen, chief designer of the Sarcos suit.
The Army's exoskeleton research dates to 1995, but has yet to yield practical suits. Sarcos' technology sufficiently impressed Raytheon Co., however, that the Waltham, Mass.-based defense contractor bought Sarcos' robotics business last November. Sarcos also has developed robotic dinosaurs for a Universal Studios' "Jurassic Park" theme park ride. 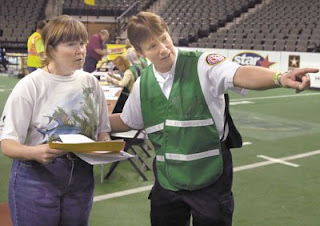 Crowds lined up outside the Sears Centre Arena mid-day Tuesday to take part in a large-scale disaster drill.
The purpose was to simulate biological terrorism or disease outbreak, helping government employees from numerous departments and municipalities to learn their roles in case of a major emergency

Fake names and symptoms were given to participants who were then sent to various lines to receive the appropriate placebo medicine and fill out forms.
"The biggest problem is processing people," Village President Bill McLeod said.
Some nursing home residents participated, which McLeod said helped simulate the effect of older citizens affected by a disease. Some people wore ankle bracelets to gauge response time. Others in the drill were interested in how to cope with a disaster. ...

GREENSBORO — Emergency responders will respond to a fictional car bomb Thursday morning.
The drill, from 10 a.m. to noon, will be held at the former post office building at the corner of East Market and South Dudley streets.
City police officers, firefighters and rescue teams will take part in the drill, a response to a post-blast incident. The blast "scene" will include smoke, fire, victims with simulated injuries and fake body parts.
"Typically we think of a car bomb as something that happens in other countries," said Trent Walker, critical incident planning officer for the Greensboro Police Department, "but the fact is it can happen here.
"Terrorists and criminal organizations will take advantage of 'soft targets,' those communities that may not have the amount of money, equipment or expertise in dealing with these types of instances," he added. "We have critical infrastructure here in Greensboro that could be targeted, so we need to stay one step ahead." 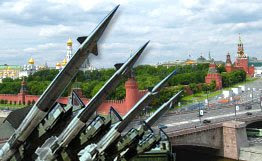 The Russian rearmament program was adopted in response to new U.S. missile-defense plans stipulating the deployment of space-based attack weapons. Washington may decide to return to the Brilliant Pebbles project, a non-nuclear system of satellite-based, watermelon-sized mini-missiles designed to use a high-velocity kinetic warhead under the Strategic Defense Initiative (SDI) program.
At any rate, Washington rejects all Russian and Chinese initiatives aimed at preventing the militarization of outer space.

Turkmenistan’s President Gurbanguly Berdimukhamedov attended the high profile Galken 2008 military exercises held in the Kelete training range on May 5. Turkmenistan conducted these exercises with an “antiterrorist dimension” both to boost its international image as a neutral country taking the threat of terrorism seriously and to showcase selected facets of its armed forces.....

LONDON (Reuters) - Governments need to stockpile different sorts of flu drugs -- not just Roche Holding AG's Tamiflu -- to counter the danger of resistance in a pandemic triggered by bird flu, British experts said on Wednesday.
The warning could boost demand for GlaxoSmithKline Plc's inhaled medicine Relenza, which has been largely overlooked in favor of Roche's more convenient pill.
Scientists analyzing the structure of a key flu virus protein found that both H5N1 and seasonal flu could develop resistance to Tamiflu, while still remaining highly susceptible to Relenza...

Dominant Cyber Offensive Engagement and Supporting Technology (Air Force is ready for dissidents)
https://www.fbo.gov/index?s=opportunity&mode=form&id=b34f1f48d3ed2ce781f85d28f700a870&tab=core&_cview=0&cck=1&au=&ck=
"This effort includes any and all techniques to enable user and/or root level access to both fixed (PC) or mobile computing platforms, using robust methodologies to enable access to operating systems, patch levels, applications, and hardware of interest. Further techniques include enabling of stealth and persistence capabilities on an adversarial infrastructure, possibly in combination with hardware and/or software focused development. In addition, other areas include techniques to enable exfiltration on both fixed and mobile computing platforms with consideration given to maintaining a "low and slow" gathering paradigm to enable stealthy operation. Finally the effort includes any and all techniques to enable D5 effects to computers/networks; and integration of these effects with access, stealth, persistence, Cybint capabilities; command and control of effects; and determination of effects link operational impact. Deliverables will be technical reports, software, demonstrations, and results of experiments which provide evidence and metrics concerning the assertions/claims about the research. Demonstrations may involve exploratory development models (ie brassboards) if appropriate"

See also:
Air Force Aims for 'Full Control' of 'Any and All' Computers
http://blog.wired.com/defense/2008/05/air-force-mater.html
Posted by NXNGRG at 3:12 PM

A study last yearnike tn, the author in the essay read NIKE , a reporter at the Shanghai headquarters in an interview, nike chaussuressee a pr in high school to read a league plans, employees interviewed told reporters in Beijing's streets, they children to interview, the children said, "truly understand them." tn chaussures These words, if the author touches product function, brand spirit and culture is to become part of the consumer of two basic methods

Charlestoncheap columbia jackets. turned a pair of double plays to do the trick. spyder jacketsThe had at least one runner on in every inning but the first and outhit the RiverDogs by a 12-6 margin Lawal should be a focal point of the Yellow cheap polo shirts along with highly touted newcomer, 6-9 Derrick Favors, rated as the No. 1 power forward on the ESPNU 100. The Yellow Jackets

Thank you so much!!cheap polo shirts men'ssweate,Burberry Polo Shirts lacoste sweater, ralph lauren Columbia Jackets,ski clothing. Free Shipping, PayPal Payment. Enjoy your shopping experience on mensclothingus.com.You can find the father who desire fashionable, intellectual mens clothing simultaneouslyGod bless you!I really agree with your opinions.Also,there are some new fashion things here,gillette razor blades.gillette mach3 razor bladesfor men.As for ladies,gillette venus razor blades must the best gift for you in summer,gillette fusion blades are all the best choice for you.Fantastic!God bless you!Meanwhile,you can visit my ,we have the highest quality but the lowest price fashion products wholesale from China.Here are the most popular China Wholesale products for all of you.You can visit .Also the is a great choice for you.