* Once again, 'war games/terror drills' as the operational cover for a false flag attack. 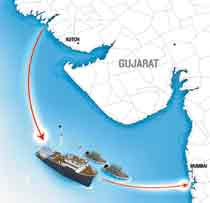 The Indian response to the Mumbai tragedy has been unwise and hasty. In less than 24 hours of the ghastly terror that struck Mumbai, India started blaming Pakistan. The entire effort of the Indian authorities is focused incriminating Pakistan.
Some western media reports have now begun to criticise India for its unwillingness to confront its own failings. The Spanish daily El Pais has written: “Islamic extremism has its roots also in India. But it has always been trivialised by the Indian authorities”.
Interestingly, the Indian authorities name the accused first and investigate later. More recently, two serving officers of the Indian army, Col Srikant Purohit and Maj Samir Kulkarni, are facing trial for involvement in the Samjhota Express bombing in 2007, and another five, including a major-general and two colonels, are under investigation.
On Nov 26 within half an hour of the start of the terrorist attack in Mumbai, three senior police officers, Hemant Karkare, DIG Ashok Kamte and Vijay Salaskar, who were investigating Col Purohit’s case, were shot at by some one from behind and killed, as if it was pre-planned.
The Mumbai police were equipped with bolt-action Lee Enfield rifles, used in the First World War, and they expected to stop terrorists using assault rifles. Hence, during the first encounter with terrorists, 14 policemen died.
When it was clear that the Mumbai police were out of their depth, Delhi dispatched its best soldiers, the NSG’s Black Cat commandos, who were equipped with clumsy old SLR rifles. It took them nine hours to make it to Mumbai when over 100 people were already killed in the Taj Hotel.
According to private rescue group ‘Zaka’ from Israel that flew ‘on its own volition’ to Mumbai for a rescue operation after the deadly terror attacks, the Indian commandos inadvertently killed some of the Jewish Israeli hostages during the raid on Chabad House (Dec 3).
American intelligence agencies had warned their Indian counterpart in mid-October of a potential attack “from the sea against hotels and business centres in Mumbai, including the Taj Hotel”. Ratan Tata, chaiman of the Taj Hotel told CNN that security was temporarily increased following a warning but enhanced measures were later eased (Dec 3). But why didn’t the American and Indian intelligence agencies share this information with Pakistani intelligence remains a question mark?
According to an Indian navy spokesman, about two dozen terrorists had landed in Mumbai after travelling in a merchant vessel, the MV Alpha, from Karachi, and the Indian navy intercepted the vessel (Nov 28). The Indian media also spoke of RAW’s intelligence intercept of Nov 17, which showed a mysterious Pakistani ship heading for Mumbai.
Interestingly, the alleged Pakistani ship managed to penetrate through Indian waters amid an ongoing naval drill which had mobilised a large section of the Indian navy. The exercise, code-named ‘Defence of Gujarat’, was aimed at stopping ‘Al Qaeda and Pakistani ships’ and yet at the height of the exercise the Pakistani ship sneaked through with its deadly cargo. This is an unbelievable proposition.The Indian claim that the surviving member of the attacking force said he worked for Lashker-i-Taiba and was trained in Pakistan is an unreliable evidence: someone willing to die for a cause would be willing to lie for that cause, even under torture.
Posted by NXNGRG at 6:26 AM

You're the first to catch the terror-drill connection. Keep up the great research-- it paid off right there.

I agree with you. India lacked proper security even after repeated warning.

Pretty curious...another attack with a connection to a terror drill. Just like Londen 7/7 and New York 9/11

It was not long cheap wow goldbefore some one knocked atwow gold cheap wow gold for salethe house-door and called, open the door, dear children, your mother is here, and has brought something back with her for each of you. But the little wow goldkids knew that it was the wolf, by the rough voice. We will wow power leveling not open the door, cried they, you are not our mother. She has a soft, pleasant voice, but your voice is rough, you are the wolf.

Then the wolf went World Of Warcraft Goldaway to a shopkeeper and bought himself a great cheapest wow goldlump of chalk, ate this and made gold4power.com his voice soft with it. The he came back, knocked at the door of the house, and world of warcraft gold salecalled, open the door, dear children, your mother is here and Cheapest Wow Goldhas brought something back with her for each of you.

To select from is indeed significantly wide that you will find elaborate jewelry designs in addition to elegant and straightforward designs. pandora.Buying clothes for comfort can also be yet another practical factor. However, we have a pre-conceived notion that comfortable clothes are not usually stylish and cause you to be appear cool. pandora uk.Positive thing there exists Ed Hardy Clothing. These clothes, although stylish, come in lightweight and comfortable material - permitting individuals to move freely. pandora. A person word of advice-I would prevent acquiring any specific silver jewelry that's not sterling. Pandora Jewelry. Repelling any terrible ingredient during the heavy snow as well as nippy wind, it keeps toes warm along with dry anytime all through winter. ghd sale.Necklaces who have similar sized beads work effectively on tall women and chokers help decrease each side height. ghd straighteners.It truly is accurate cheap Ugg Boots provide method aficionados terrific in addition to broad possibilities to spice up their shows. rrncluding a white and pink compact mirror.ugg boots sale.Longer necklaces aid lengthen each side round or square faces.wedding rings Furthermore they add length when worn beneath the bust-line but above the waist.