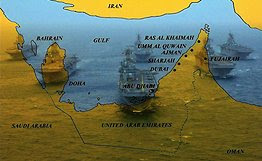 TEHRAN, December 3 (RIA Novosti) -- Iran has conducted the second stage of a four-stage, six-day naval exercise in the Gulf of Oman, a top military commander said on Wednesday.
Over 60 warships, as well as other military hardware and equipment, are involved in a large-scale naval exercise, code-named Unity-87, that will last through December 7.
"During Stage 2 of the Unity-87 exercise, destroyers, submarines, fighter jets, and unmanned aerial vehicles rehearsed the detection and effective engagement of aggressive forces," Deputy Navy Commander Adm. Qasem Rostamabadi said.
He had previously said the drills would also include "multi-phased operations in the strategic Strait of Hormuz in the Persian Gulf

The system will shoot down ballistic missiles in their "boost-phase"

The United States has fired a missile defense laser through an aircraft-mounted turret, the U.S. Missile Defense Agency announced Wednesday (see GSN, Sept. 10).
The aircraft remained on the ground as the Airborne Laser fired a beam that passed through a fire- and beam-control optical system and exited through the turret on the plane's nose. The beam hit an off-board range measurement device that gathered data from the test.
The Northrop Grumman-built laser is expected to undergo several, longer tests early next year. The modified Boeing 747-400F jumbo jet aircraft is then scheduled next fall to attempt to destroy a mock enemy ballistic missile in its boost phase (U.S. Missile Defense Agency release, Nov. 26).
"The ground test proves that the ABL integrated weapon system works as planned," Dan Wildt, vice president of Directed Energy Systems for Northrop Grumman Space Technology, said in a statement. "Thisimpressive achievement validates the safe operation of the high-energy laser in conjunction with all other components of the revolutionary directed energy ABL aircraft" (Northrop Grumman release, Dec. 1). 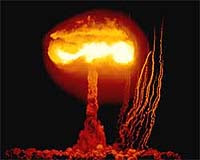 Terrorists are "likely" to use nuclear or biological weapons in the next five years, a US commission warned Tuesday, highlighting Pakistan as the weakest link in world security.
Without urgent action, "it is more likely than not that a weapon of mass destruction will be used in a terrorist attack somewhere in the world by the end of 2013," the bi-partisan commission said in its report "World at Risk."
The report, ordered by Congress and based on six months of research, warned the incoming administration of Barack Obama: "America's margin of safety is shrinking." (cont...)

www.aethlonmedical.com/pdfs/BroadSpectrumTreament120308.pdf
Summary of the Report
Biological weapons of mass destruction and emerging pandemic threats represent a significant security and health challenge for all nations. The development and commercialization of traditional drug and vaccine countermeasures is an immense challenge requiring enormous resources. The advancement of single-target drug and vaccine therapies as the predominant strategy to address a universe of known and unknown bioterror and pandemic threats is clinically and economically unfeasible. Accordingly, the Department of Health and Human Services (HHS) of the United States has decreed that broad-spectrum therapies, able to demonstrate effectiveness in combating multiple pathogens, will become a focal point for government initiatives that encourage the development of countermeasures against bioterror and pandemic threats. This paper introduces the Aethlon Hemopurifier(R) as the most advanced broad-spectrum treatment platform as evidenced by a breadth of supporting in vitro data and human treatment experience.

Obama vows to keep military 'strongest on the planet' (change...)
http://www.spacewar.com/reports/Obama_vows_to_keep_military_strongest_on_the_planet_999.html
Terrorist response drill to be held on PATCO line in Lindenwold and Camden
http://www.nj.com/south/index.ssf/2008/12/terrorist_response_drill_to_be.html

Boeing teaming with Hollywood company
http://www.bizjournals.com/losangeles/stories/2008/12/01/daily18.html
The Boeing Co. is going Hollywood for new training systems for the military and law enforcement, striking a deal with Creative Technologies Inc.
CTI is a Hollywood-based company that creates products such as software for game-based simulations for ground forces training.
The deal is a formalization of an ongoing relationship -- CTI is a contributor to the Boeing Future Combat Systems program, and Boeing and CTI are partners in the U.S. Army's Fires Center of Excellence at Fort Sill, Okla.

DARPA seeks Hitchhikers Deep Thought program
http://www.theregister.co.uk/2008/12/03/darpa_deep_thought_en_mem/
Pentagon boffinry chiefs are seeking to develop radical AI software capable of boiling down information from the news, overhead spy planes, wiretaps and so on "into a form that is more suitable for human consumption". Specifically, this means using the data to produce "a cohesive story that is germane to the goals of a decision-maker".

I really appreciate what you write here, very insightful and smart. One thing though, I’m running Firefox on Fedora and some of your site structure are a little misaligned. I know it’s not a common setup, but it is still something to watch out for. Just shooting you a heads up.

Its such as you read my mind! You seem to know a lot approximately this, like you wrote the e book in it or something. I feel that you simply can do with some p.c. to drive the message house a bit, however instead of that, that is magnificent blog. A fantastic read. I will definitely be back.