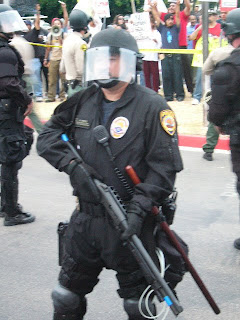 What To Expect When Martial Law Is Declared
http://www.nolanchart.com/article5188.html
Coming Soon To A Neighborhood Near You After The World-Wide Economic Collapse 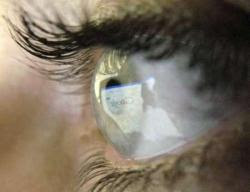 The FBI's newly appointed chief of cybersecurity warned today that "a couple dozen" countries are eager to hack U.S. government, corporate and military networks. While he refused to provide country-specific details, FBI Cyber Division Chief Shawn Henry told reporters at a roundtable cooperation with foreign law enforcement is one of the bureau's highest priorities and added the United States has had incredible success fostering overseas partnerships. 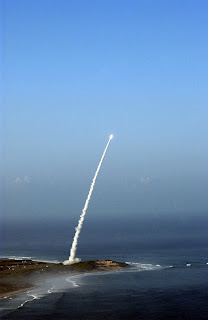 Space-based defense
http://www.washingtontimes.com/news/2008/oct/16/inside-the-ring/
Congress voted recently to approve $5 million for a study of space-based missile defenses, the first time the development of space weapons will be considered since similar work was canceled in the 1990s.
Appropriation of the money for the study was tucked away in a little-noticed provision of the Continuing Resolution passed recently by Congress and followed two years in which Congress rejected $10 million sought for the study. < Sen. Jon Kyl, Arizona Republican and a key supporter of missile defenses, said approval of the study highlights the need to provide comprehensive protection from the growing threat of missile attack and to limit the vulnerability of vital satellites to attack.
"We have the potential to expand our space-based capabilities from mere space situational awareness to space protection," Mr. Kyl said in a Senate floor speech.

FORT BLISS -- The man responsible for putting the Army's high-tech equipment -- even before it's ready for mass production -- into the hands of combat soldiers in hot spots around the world received his second star during a ceremony Tuesday morning at Fort Bliss.
Brig. Gen. James Terry, commander of the Future Force Integration Directorate, was promoted to major general under gray skies that threatened rain. The directorate is responsible for testing and distributing the Army's Future Combat Systems equipment, which includes unmanned aerial and ground vehicles and remote sensors.
"He (Terry) truly understands the operational environment our soldiers are fighting in," said Lt. Gen. Michael Vane, director of the Army Capabilities Integration Center, who presented Terry with his star. "His experience and insights ... will be critical as our nation navigates through this time of persistent conflict."
Vane cited Terry's service, including tours in Iraq and Afghanistan. And he spoke of the current style of conflict in which friend often is indistinguishable from foe...

SAIC to develop explosives sensor for DARPA
http://www.washingtontechnology.com/online/1_1/33724-1.html
Science Applications International Corp. will develop a sensor to help troops in the battlefield detect explosives and chemical or biological weapons under a Defense Advanced Research Projects Agency contract potentially worth $18 million.
The award from the agency’s Defense Sciences Office calls for SAIC to design and develop a sensor inspired by a canine’s olfactory system, or sense of smell.
SAIC will model, design and develop the sensor, which will include subsystems for air and odor intake, detection using olfactory receptors, signal transduction, and pattern recognition to identify odors. The sensor could help protect U.S. forces in war zones by detecting explosives and chemical or biological weapons.