The markets continued to plunge today with no bottom in sight.
I am expecting a "kicking the chessboard" reaction, or a staged
attack from Al Qaeda from Mexico (see below) then voila, for "security + emergency needs - the North American Union - with new currency?
Anyone else thinking of stocking food? This aint no Y2K crap. We are at
a very serious crossroad in human history. 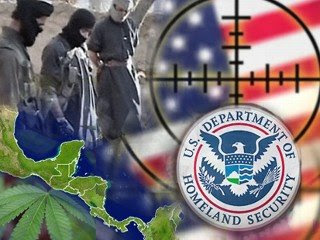 There is real danger that Islamic extremist groups such as al-Qaida and Hezbollah could form alliances with wealthy and powerful Latin American drug lords to launch new terrorist attacks, U.S. officials said Wednesday.
Extremist group operatives have already been identified in several Latin American countries, mostly involved in fundraising and finding logistical support. But Charles Allen, chief of intelligence analysis at the Homeland Security Department, said they could use well-established smuggling routes and drug profits to bring people or even weapons of mass destruction to the U.S.


Russia trains to fight NATO in giant exercises (update)
http://www.upi.com/Security_Industry/2008/10/09/Russia_trains_to_fight_NATO_in_giant_exercises/UPI-92521223583062/
MOSCOW, Oct. 9 (UPI) -- The Stability-2008 strategic maneuvers of the Russian armed forces are gaining momentum.
On Monday, Tupolev Tu-95MS Bear-H and Tupolev Tu-160 Blackjack strategic bombers began training flights with full combat payloads and the live firing of cruise missiles at practice targets.
The Stability-2008 strategic exercise, which began Sept. 21 in Russian and Belarusian territory and at sea, is the largest since the Soviet era. Within the next month the armed forces will be practicing a wide variety of tasks, including containing armed conflicts and strategic deterrence. In total, the drill will feature tens of thousands of servicemen, thousands of vehicles, air and naval forces, space troops and strategic nuclear forces.

PHOENIX -- Thousands of people were evacuated from buildings in downtown Phoenix Thursday morning in what is being called the "world's biggest fire drill."
Over three days, the Phoenix Fire Department will evacuate more than 40,000 people in 60 downtown buildings in preparation of a high-rise fire. 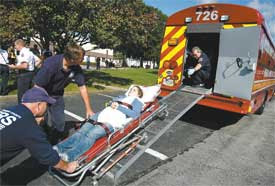 Excerpt:
A three-ring disaster drill
The simulation involved more than 200 personnel and brought in emergency services operators from Laurel; Prince George's and Montgomery counties; Maryland State Police; the American Red Cross; and federal agencies such as the Federal Bureau of Investigation and the Bureau of Alcohol, Tobacco and Firearms.
Jones said the scenario was aimed at testing the region's response to an emergency in three specific ways.
The simulated terrorist attack began shortly after 7:30 a.m., when an extremist group "phoned in" a bomb threat to Laurel city hall. Then at around 9 a.m., the simulation continued with a bomb exploding at city hall, killing the mayor and several city officials.

Emergent BioSolutions gets 'emergency' protection
http://www.bizjournals.com/baltimore/stories/2008/10/06/daily45.html
Emergent BioSolutions Inc. has been shielded from lawsuits related to its profitable anthrax treatments.
The Rockville-based biotech said Thursday its anthrax treatments, the vaccine Biothrax and its Anthrax Immune Globulin, have been designated as covered countermeasures to a public health emergency under the Public Readiness and Emergency Preparedness Act. The act provides liability protection to manufacturers to encourage them to seek defenses for severe health risks like anthrax.

You raise a vital point:
As you know, the 3rd Infantry is at the ready in GA to respond to a "man-made emergency" under NorthCom (so...here). I think we know the nature of this emergency (whether the Mexican scenario you outlined; or something else): there is an impending economic collapse, consequent civil "unrest", reaction, etc., etc. None of this is avoidable. However, you mention preparadness of food etc.: it must be remembered that the rural paradigm of homesteading is not applicable to us in more urban settings. To survive this we must collectivize in networks of support (the Libertarians may prefer to use their term "Gulching", but the process is the same); and we do not have much time...
-Patrick Stanton