If war ever breaks out in space it's not the loss of individual satellites that will do the damage, but the debris this produces. It will stay in orbit and go on harming satellites for decades, according to two studies presented at the American Physical Society meeting in St Louis, Missouri, last week.
A commission chartered by the US Congress in 2000 warned that the US military's dependence on satellites would mean a space attack could be crippling. Last year, China heightened fears of a space war by testing an anti-satellite weapon, while earlier this year the US destroyed one of its own defunct satellites using a missile.
Now it seems that the immediate impact of a space war, at least on the US military, would be limited. "We have built up such high redundancy to space assets that we're almost invulnerable," says Geoff Forden of the Massachusetts Institute of Technology, who assessed the risk posed by China to the US. He found that only a few of the US's low-Eart-orbit satellites are over China at any one time, and that higher-orbiting satellites used for GPS, communications and surveillance could only be destroyed by multistage missiles, for which China has only three launch pads......
India Launches 10 Satellites At Once
http://science.slashdot.org/article.pl?sid=08/04/28/1311213

Battle lines in the final frontier
http://www.smh.com.au/news/science/battle-lines-in-the-final-frontier/2008/04/25/1208743246529.html
" as the space age enters its second half-century, there are growing concerns the world is on the verge of a hugely expensive and potentially catastrophic extraterrestrial arms race.
"It will bankrupt nations if they don't blow themselves up in the meantime," Brett Biddington, a former RAAF officer and author of a paper on space engagement, warns."
The satellite shootdown: the rest of the story
http://www.thespacereview.com/article/1113/1


Officials: Long Island bomb drill going smoothlyhttp://www.newsday.com/news/local/longisland/ny-lidril0426,0,731423.storyA large-scale emergency drill went smoothly Friday at the Suffolk County Fire Academy in Yaphank, officials said, despite a two-hour delay because of an accident on the Long Island Expressway.The drill, which simulated a dirty bomb going off in a federal courthouse, brought out hundreds of Long Island volunteers from fire departments, emergency medical services, county police, hospitals and other government agencies.More than 600 people from 60 agencies from both Nassau and Suffolk counties will participate in the event, which officials call the biggest in Long Island's history. The drill will conclude Saturday afternoon.

U.S.-Canadian safety drill briefly closes Detroit-Windsor tunnel http://canadianpress.google.com/article/ALeqM5iRQV6v7ZlNpg0-DetNXX2zoELdywDETROIT — U.S. and Canadian authorities have completed an emergency exercise that led to the temporary closing of the Detroit-Windsor tunnel.
Sunday's exercise forced auto traffic onto the Ambassador Bridge, the other road link between the neighbouring cities.
The training exercise was a combined effort by U.S. Customs, Canada Border Services, and police, fire and rescue agencies in both countries.
Canada Border Services spokesman Danny Yen says authorities chose Sunday morning for the exercise because it's the slowest time for the tunnel. (Related to 8 day exercise? See below)

Mass casualty drill this week will test Collier County's first responders (FL)http://www.naplesnews.com/news/2008/apr/27/mass-casualty-drill-week-will-test-collier-countys/"During this real-time drill, new dangers are expected to develop by the minute. To keep the pressure on, emergency managers keep the specifics of the drill secret, and throw in new developments as they go along. It could be terrorism, nuclear attack, massive rioting, natural disaster or anything else. It’s all secret... 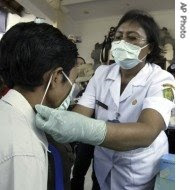 "Let us out! We don't want to die here!" a man screamed as masked police officers set up barricades around his village after learning the deadly bird flu virus had mutated to a form spreading rapidly among humans. Dozens of other panicked residents joined him in squaring off with the troops.
Fortunately, this was only a drill.
But for the 5,000 people taking part, the massive three-day simulation on Bali island had special resonance. Government officials, police, hospital workers and residents all know a bird flu pandemic could be looming, with Indonesia at the epicenter.
In the mock scenario, the first sign of trouble in Dangin Tukadaya village came Friday when a man reported he was still suffering from flu-like symptoms five days after coming into contact with a dead chicken. Tests revealed that poultry in his neighborhood had been infected with the H5N1 virus, and an animal husbandry official ordered all fowl within a 1-kilometer (half-mile) radius slaughtered...
Modernizing the USA’s Strategic Weapons Facility Pacific
ithttp://www.defenseindustrydaily.com/Modernizing-the-USAs-Strategic-Weapons-Facility-Pacific-04860/?camp=newsletter&src=did&type=textlink 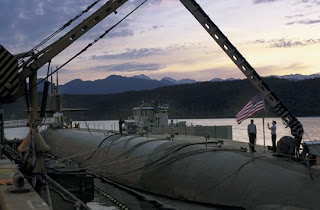 Naval Base Kitsap is one of the homes for the USA’s fleet of Trident nuclear missile submarines; the Strategic Weapons Facility Pacific stores both propellant and nuclear warheads. One report claims that this location has the highest concentration of nuclear warheads in the USA with more than 2,300 warheads, about half of which are sailing aboard America’s Pacific fleet of ballistic-missile submarines at any given time.
A set of contracts begun in 2008 aim to make improvements to this facility. They aren’t cheap, but one can argue that they’re worth it
FCS Launch System Tested at White Sands
http://www.army.mil/-news/2008/04/25/8776-fcs-launch-system-tested-at-white-sands/

The non-line-of-sight launch system recently completed the Future Combat System technical field test at White Sands Missile Range, N.M. The test proved the system's ability to integrate and operate with other FCS as well as current force equipment. The launch system will be tested further this summer. " Photo by NLOS-LS Project Office
WHITE SANDS MISSILE RANGE, N.M. (Army News Service, April 25, 2008) --The non-line-of-sight launch system has completed the first of multiple summer tests, meeting all mission requirements. The Future Combat System technical field test, conducted in February and March, marked the beginning of a summer of demanding developmental and operational tests for the FCS command and control network, as well as a host of FCS related programs, to include Redstone Arsenal's NLOS-LS. The NLOS-LS reaped praise from users and evaluators alike during the test...
Navy and EDS test COOP with NMCI
http://www.fcw.com/online/news/152368-1.html

U.S., Canadian emergency responders plan 8-day exercise (update)
http://canadianpress.google.com/article/ALeqM5jB5mRWGAsyFfJIucrifT7W0PDjyg
PETERSON AIR FORCE BASE, Colo. — The United States is testing its ability to deal with simultaneous terrorist attacks and natural disasters in a continent-wide exercise this week.
Scenarios in the eight-day exercise starting Wednesday include terrorist attacks, an accidental chemical release, a hurricane on the mid-Atlantic coast and "aerospace events" throughout North America.
The North American Aerospace Defence Command and the U.S. Northern Command, based at Peterson Air Force Base in Colorado Springs, are among the responders who will participate.
Also participating are the Department of Homeland Security, the Federal Emergency Management Agency, the U.S. Transportation Command and the U.S. National Guard.
The Canadian Forces' Canada Command will be conducting a parallel three-day exercise during the same period, Lt.-Cmdr Diane Grover said in Ottawa.
One portion of the exercise will be a table-top simulation conducted at Canada Command's offices in Ottawa, involving about 75 to 100 people, aimed at enhancing the command's ability to respond to requests for assistance from civil authorities, Grover said.
The second portion is a "boots on the ground" training exercise for such a request for help in Quebec's Charlevoix region, dubbed Reaction Royale and running until May 6.
* This reads like a scenario to slam SPP down North America's throat because of "terrorism"

L-3 Communications Decoded [LLL]
http://www.rttnews.com/sp/LongTermStocks.asp?date=04/28/2008&item=2
/28/2008 12:16:10 PM As the U.S. continues to ramp up military spending, the defense sector stocks have become more attractive than never before, becoming a safe haven for investors to stash their cash.Defense sector stocks are not sensitive to the fickle consumer demand and are driven only by government budget cycles and are historically immune to economic downturn. Since 9/11, the security and defense industry, which was already doing quite well, has continued to outperform the market.The SPADE Defense Index, which benchmarks the performance of companies involved with defense, homeland security, and space, gained 22.2% in 2007 and has outperformed the S&P 500 for eight consecutive years. As the adage goes, ‘Every cloud has a silver lining', defense sector stocks outperform in times of conflict. One such stock that has benefited from the September 11, 2001 terrorist attack and from five years of war in Iraq is defense contractor L-3 Communications Holdings Inc. (LLL
Its future uncertain, barrier on the border going up quickly
http://ap.google.com/article/ALeqM5jwA32Yl0hPf7jLqF2ssQSDqYFuZQD90B24TO0
DHS Unveils Small Vessel Security Strategy
http://www.dhs.gov/xnews/releases/pr_1209390662950.shtm
Everyday Boaters Enlisted to Fight Terrorists
http://www.firstcoastnews.com/news/topstories/news-article.aspx?storyid=108019
State unveils pandemic flu planning kit
http://www.bizjournals.com/orlando/stories/2008/04/28/daily7.html
Posted by NXNGRG at 3:20 PM