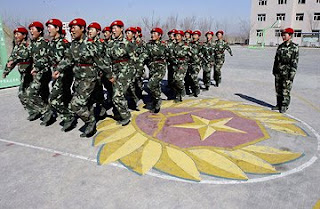 Paramilitary policemen participate in an anti-terror military drill in Urumchi, Xinjiang Uygur Autonomous Region April 9, 2008.
The run-up to the Beijing Olympics has been clouded by one confusing crisis after another. Jacques Rogge, President of the International Olympic Committee president, said on Thursday that he was "saddened" by the violence that broke out along the torch relay's bumpy road and acknowledged that it had not been "the joyous party that we had wished it to be." Hours later, the Chinese Ministry of Public Security held a press conference to announce that the authorities had nabbed two terrorists groups in Xinjiang that had "attempted to carry out sabotage to undermine the Beijing Olympic Games." Despite Beijing's alarm, however, some observers are looking at this unveiled terror threat with a skeptical eye......"China has deliberately confused terrorists with ordinary criminals, political organizations, and dissidents before, and has used it as an excuse for repression." .... (fictional terrorism worked so well in crypto-Fascist USA, Chinadecided to follow suit!)
Lexington: US Politics and the Defense Budget
http://www.defenseindustrydaily.com/Lexington-US-Politics-and-the-Defense-Budget-04839/?camp=newsletter&src=did&type=textlink
”... if the Democratic Party wins control of the White House and Congress in November, it will take a huge demand stimulus from the likes of Osama bin Laden to prevent a leveling off and then decline in defense spending in subsequent years.”
U.S. Air Force sets up cyberspace command against continuing China attacks
http://www.worldtribune.com/worldtribune/WTARC/2008/ea_china0041_04_10.asp 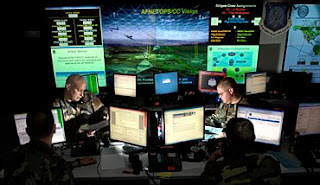 China has developed cyber warfare forces and the Air Force has created a cyberspace command to provide both defensive and offensive computer network weapons, a senior Air Force general said last week.
Asked if China was planning a cyber “Pearl Harbor” surprise attack, Maj. Gen. William Lord, the cyber forces commander, said numerous Chinese-origin probes may be “reconnaissance” intrusions to determine if cyber warfare capabilities are detected as part of preparation for some future attack. “So when the lights go out, when the traffic lights don't work, when the data in the stock exchange has been manipulated, when the cell phones don't work, when the escalators in FAO Schwartz don't work, imagine what happens within the United States. Imagine that now laid over a command and control ability of any force,” he said at a conference of the Council on Foreign Relations.
Air Force Col. Jeffrey Kendall, who appeared with Lord, said China has been among the most active players in the cyberwarfare arena. Chinese hackers took down a White House website in 2001 and in June 2007, the Chinese military was behind an attack on the secretary of defense’s unclassified email systems. And in August 2007, 28 defense contractors were targeted by Chinese hackers.
Pandemic flu plans stalled, planners say
http://www.burlingtonfreepress.com/apps/pbcs.dll/article?AID=/20080410/NEWS02/804100311/1007
"Turgeon's efforts at UVM assume a worst-case scenario, published by the U.S. Centers for Disease Control and Prevention: At least two waves of contagion will infect up to 30 percent of any given population; hospitals will be overwhelmed; food and water will be in short supply" ......
Israel concludes largest civil defence drill
http://afp.google.com/article/ALeqM5hKcEfxDKweViYgnzLwBvgOM2eJ5A

JERUSALEM (AFP) — Israel wound up its largest ever civil defence exercise on Thursday with a simulation of a chemical weapons attack on a hospital and claimed the five days of drills worked well.
In the final drill a hospital in the northern city of Afula was evacuated during a simulated chemical weapons strike, a military spokesman said.
The home front manoeuvre was aimed at preparing Israel for possible attacks involving conventional weapons as well as missiles equipped with chemical or bacteriological warheads.
The exercise, which began on Sunday "worked very well, everything worked according to what we planned. We thought we would have many more problems," said defence ministry spokesman Shlomo Dror.
Report details response to terrorism drill (OK)
http://www.kten.com/Global/story.asp?S=8149731
OKLAHOMA CITY (AP) - A new federal report on a simulated terrorist attack shows officials had problems determining the damage caused by mock "dirty bombs" and relaying that information to the public.....
Portland police to hold disaster drill (ME)
http://news.mainetoday.com/updates/025183.html
CAJMTC Hosts Civil Support Team Exercise Viking Shield
http://newsblaze.com/story/20080410143455tsop.nb/newsblaze/IRAQGOOD/Support-Our-Troops,-Read-Their-Stories.html
Hospital to carry out major incident exercise (UK)
http://iccheshireonline.icnetwork.co.uk/0100news/0100regionalnews/tm_headline=hospital-to-carry-out-major-incident-exercise&method=full&objectid=20748718&siteid=50142-name_page.html
PATIENTS and visitors to Wrexham Maelor Hospital this Saturday are being warned the site will be carrying out a test of its major incident procedures.....
Oregon CAP to Conduct Major Exercise This Weekend
http://www.salem-news.com/articles/april102008/oregon_cap_041008.php
* I would post info to Portland "indy" media, except they now censor my posts, this alleged"indy"media is yet another COINTLEPRO asset.
General Dynamics Advanced Information Systems Completes Testing for GeoEye’s Next-Generation Earth Imaging Satellite http://spacefellowship.com/News/?p=5039
GeoEye-1 is part of the National Geospatial-Intelligence Agency (NGA) NextView program. The NextView program is designed to ensure that the NGA has access to commercial imagery in support of its mission to provide timely, relevant and accurate geospatial intelligence in support of national security.
Researchers Pursuing Nasal Anthrax Vaccine
http://health.usnews.com/usnews/health/healthday/080410/researchers-pursuing-nasal-anthrax-vaccine.htm
Posted by NXNGRG at 3:38 PM

Hello. This post is likeable, and your blog is very interesting, congratulations :-). I will add in my blogroll =). If possible gives a last there on my blog, it is about the Notebook, I hope you enjoy. The address is http://notebooks-brasil.blogspot.com. A hug.