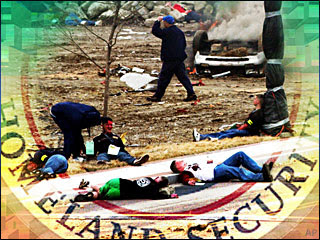 Portland, Oregon A terrorist organization known as the Universal Adversary will set off a radiological dispersal device - also known as a dirty bomb - at the Portland International Raceway in two weeks.
Shortly after, the group will carry out similar attacks in Phoenix and the U.S. territory of Guam.
But do not fret - the attacks are fakes, part of a four-day Homeland Security disaster-preparedness drill called Top Officials -or TOPOFF - 4.
A news conference to officially announce the drill will be held Thursday in the governor's ceremonial office in the state Capitol.
Three such drills have been held so far. Seattle took part in TOPOFF 2 in 2003, and officials there said Portland will benefit from the upcoming one.
"It was a very difficult and very expensive exercise to put on," Seattle Deputy Police Chief Clark Kimmerer said. "But the learning opportunities were just immense."
The Portland Bureau of Fire, Rescue and Emergency Services expects its year-old mobile communications center to play a big role in the local drill.
The $940,000 center is capable of patching together every type of radio frequency, allowing responders from multiple jurisdictions to communicate freely. Audio and video feeds also can be routed into the center or streamed to other agencies off-site.
"Historically speaking, the biggest problem at an emergency scene has been communication from one agency to another," Deputy Fire Chief Glen Eisner said.
The command center also has a complete weather station, cameras that allow responders to safely monitor disaster sites, and infrared cameras to detect hot spots while fighting fires. It also allows emergency responders to coordinate a plan off-site with real-time information from the affected areas.
The city is taking steps to deal with any increase in 911 calls that result from the drill. The emergency management office is mailing postcards to residents in the areas where the mock attack and other activities will be staged to inform them that the drill is not a security risk.
According to the agency, people can call 211 to learn what to expect in their neighborhoods and for other information about the exercise.
City Commissioner Randy Leonard, who oversees the Bureau of Emergency Communications, said staff will work overtime to handle any increase in 911 calls caused by the drill.
"I think we're ready," Leonard said. "Hopefully people will understand it's practice; we're doing a lot of publicity to inform people of the drills. One way to get ready for a disaster is to get people out there assuming roles and finding glitches in the system."
To help pay for the drill that begins Oct. 16, Portland area governments secured $2.5 million in Homeland Security grant money. None of Portland's general fund money will be spent on it.
Training goes international
Portland and Guam will participate in full-scale "boots on the ground" exercises, according to Kerry Dugan, senior public information officer with the Portland Office of Emergency Management. Phoenix will participate in what's known as a "tabletop" exercise that involves only planning.
Australia, Canada and the United Kingdom will participate in the diplomatic side of TOPOFF 4, requiring that international communications also be tested.
"It's great for intergovernmental communications," Kimmerer said,
The drills are set to challenge and test all levels of policies and procedures involved in responding to a major disaster. Once the bomb goes off, local paramedics, police officers and firefighters will respond to the scene and begin dealing with rescue and decontamination issues. Government officials and people working in the private sector will begin working on an evacuation and long-term decontamination plan.
Many consider the TOPOFF exercise an effective way to test emergency response systems without placing lives or property at risk.
"You're going to learn what you do well and what you need to work on. Those are the things that are learned though exercises like TOPOFF, and that script is invaluable," Kimmerer said.
Lessons already learned
According to Dugan, Portland already is better off simply from the planning it has gone through to prepare for the exercise.
Once the exercise has run its four-day course with several different sites being affected by different scenarios, Dugan said, "we can go through and adapt the plan and fix the things that didn't work. This is a great opportunity to make sure we're prepared."
Casey Corr, the former director of communications for Seattle's City Hall during TOPOFF 2, called the drill "an extraordinarily valuable exercise because it got people into emergency planning. The exercise made you think through and improve millions of protocols."
"It got us to think - that was the first thing it got us to do," Corr said. "Second, it got us to talk. It got city people to talk to state people and people in the federal government. The third thing is, it got us to practice. A plan is worthless unless you practice it."
Fire bureau spokesman Lt. Allen Oswalt said the training will help with other emergencies.
"A lot of the same steps we take in TOPOFF will pay off in responding to a natural disaster or even an ice storm," Oswalt said.
"I'm very impressed with Portland," Kimmerer said about his meetings with Portland planners and Chief Rosie Sizer of the Portland Police Bureau. "I have every confidence they will do well and learn a lot from this."
Posted by NXNGRG at 5:22 PM