Army in the Streets?, Pandemic, Solution to $$$ Meltdown? 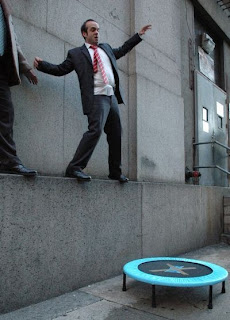 * The financial meltdown and subsequent Nationalizing of the financial sector of our economy is not over - this is a coordinated, piecemeal collapse (with more to come). I expect a "sudden mass medical emergency" i.e a manufactured plague to be unleashed soon. We all need to be vigilant. look into your cities Continuity of Government plans, search for Pandemic plans:
Here is a link to a press conference in my city, Burlington. I ask the question about contingency plans for forced quarantines etc: http://blip.tv/file/1270776/
Brigade homeland tours start Oct. 1 (Martial Law watch)
3rd Infantry’s 1st BCT trains for a new dwell-time mission. Helping ‘people at home’ may become a permanent part of the active Army
http://www.armytimes.com/news/2008/09/army_homeland_090708w/ 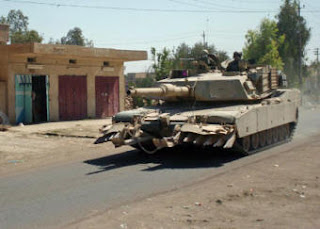 The 3rd Infantry Division’s 1st Brigade Combat Team has spent 35 of the last 60 months in Iraq patrolling in full battle rattle, helping restore essential services and escorting supply convoys.
Now they’re training for the same mission — with a twist — at home.
Beginning Oct. 1 for 12 months, the 1st BCT will be under the day-to-day control of U.S. Army North, the Army service component of Northern Command, as an on-call federal response force for natural or manmade emergencies and disasters, including terrorist attacks. 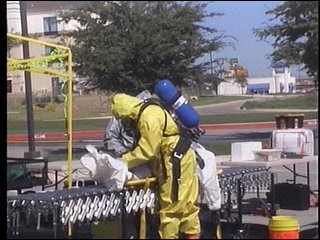 Wednesday in Ardmore, The National Guard's 63rd Weapons Of Mass Destruction Team out of Norman, paired up with local emergency responders to conduct a mock drill. The drill involved a chemical release in The Ardmore Convention Center with a large group of people inside. KTEN's Hailee Holliday reports.
Ardmore firefighters say this is the first time they have gotten the chance to work with the mass destruction team and claim the scenario was important to practice in case it were to happen here.
Authorities with The National Guard say the team trains with emergency responders around the state, each time having a different scenario.
http://www.govtech.com/gt/articles/412401 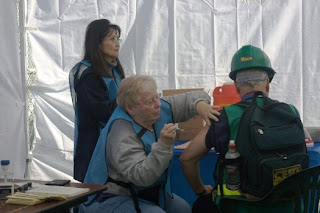 Nation Inadequately Prepared for Severe Pandemic, Says NGA
States are making significant progress toward safeguarding their citizens against an influenza pandemic, but the nation as a whole remains inadequately prepared for a severe pandemic outbreak according to a new report by the National Governors Association Center for Best Practices (NGA Center). The report, Pandemic Preparedness in the States: An Assessment of Progress and Opportunity, presents an overall appraisal of the current level of pandemic preparedness in the states and offers recommendations for improvement in five areas.
"Even though this issue largely has fallen off the public's radar, states recognize that successfully managing a pandemic outbreak requires a sustained effort to combat the threat in all sectors of the economy and in society as a whole," said Chris Logan, program director of the NGA Center's Homeland Security and Technology Division. "The conclusions of this report serve a vital national service: they demonstrate both the extent of our readiness as well as the gaps in our current preparedness."

"There has been no significant action to ensure that if Congress is wiped out or left without a constitutionally mandated quorum, it can be reconstituted quickly. The previous Republican Congress passed a woefully inadequate, poorly drafted bill to expedite special elections that is almost farcical; the Democratic Congress has neither repealed it, amended it nor offered any realistic alternative. The Republican House jammed through a clearly unconstitutional rule unilaterally changing the constitutional definition of a quorum, a change that was rejected by every major constitutional scholar who was asked; the Democratic Congress inexplicably left it in place.
The Presidential Succession Act of 1947 has no relevance to the challenges and potential disasters of 2008 and beyond. But we have had a single hearing of relevance over the past seven years, and no action whatsoever. The Supreme Court has no succession plan at all in place--despite the fact that if there were a disaster, and real questions raised about what is appropriate and constitutional, the court would or should play a critical role as arbiter. Once again, nothing done over seven years.
We are approaching an inauguration that will be historic in many ways--and also the single most vulnerable day for our constitutional system. The plans to ensure that the worst-case scenario there will not turn into an even worse scenario for the country and its future? Zero. Happy seventh anniversary..."

Technology Critical To Modern Warfare
Success in future warfare conflicts will depend largely on how quickly and how effectively different technologies can be implemented in the battleplace.
http://www.mwrf.com/Articles/Index.cfm?Ad=1&ArticleID=19721

Laser weapons are among the advanced technologies being incorporated into next-generation weapons systems. In addition, dynamically guided missile systems, unmanned ground vehicles (UGVs), and unmanned aerial vehicles (UAVs) will take part in a not-so-distant future battlefield where opposing forces will ultimately try to save soldiers’ lives by squaring off against each other’s technologies.
For example, Northrop Grumman (http://www.northropgrumman.com/) is playing a major role in the development of the US Army’s High Energy Laser Technology Demonstrator (HEL TD). The mobile, solid-state laser weapon system will be mounted on a tactical ground vehicle as a weapon against rockets, artillery, and mortars. The firm has performed the preliminary design review requirements for the HEL TD’s beam control subsystem ahead of schedule, according to the timing established by a first-phase contract awarded a year earlier by the US Army’s Space and Missile Defense Command. Northrop Grumman is now prepared to complete the design, assembly, and integration of the beam control system, leading up to a test in 2010. .....