Resource Wars Will Be Managed By a 'Pandemic"? 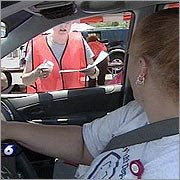 
"Apparently, I've been exposed to anthrax and so I have been given medication to take," explained one participant, Sharon Nevilles.


KNOXVILLE, Tenn. (WVLT) -- If there was a large scale anthrax outbreak in the Knoxville region, would the Knox County Health Department be prepared to treat you? That was the purpose of a first-of-its-kind drill conducted Monday.
The test at Karns High School was a first in Tennessee.
if (self['plpm'] && plpm['Mid-Story Ad']) document.write('');if (self['plpm'] && plpm['Mid-Story Ad']){ document.write(plpm['Mid-Story Ad']);} else { if(self['plurp'] && plurp['97']){} else {document.write(''); } }if (self['plpm'] && plpm['Mid-Story Ad']) document.write('');
Volunteers drove to the school to see how efficient Knox County Health Department workers were at evaluating conditions and dispensing medicines to keep them safe.
After a pretend anthrax exposure at Knoxville's Civic Coliseum during an event, a few hundred people participated in a drill to test a drive through way to get well.
Participants knew only the barebones of why they had driven to Karns High School.
Drill Volunteer Margie Nelson says, "Anthrax was released at the civic center and I was there so I've got to be treated."
Drill participant Susan Cobb says in the mock situation, nothing has happened to her, “This is just to make sure I don't get it."
So the volunteers were told where to go.
At the first station, they filled out their paperwork. Then they received medication to fight the anthrax exposure at the second station.
Public Health Director of Nursing John Lott says, "This is the first time in Tennessee that a drive thru pod has been conducted and as it just is an exercise we're trying to make sure we work out all the kinks."
Health officials believe this may very well be the best way in dealing with such a crisis when five thousand people could be exposed to such a deadly toxin.
Lott says, "They can just drive right through. We can do the evaluation and dispense the medication."
Knox County Public Health Officer Dr. Martha Buchanan says, "This is just a bigger version of the drive thru, especially with antibiotics. You know, we're not giving you a shot. You don't have to roll up your sleeve or anything else to get an antibiotic."
In these days of terrorism, Dr. Buchanan feels the drive thru method of dispensing drugs could be a powerful tool against it, and it's been tested before.
Dr. Buchanan says, "Communities have used this for flu vaccine. There are communities that have done drive thru flu vaccines."
The question now is how well did the drill do in trying to help so many people?
The Health Department will try to figure out what went well, what didn't, and what they need to do to better the process for the future.

Hundreds of volunteers answered the Blount County Health Department's call on Monday, turning out for a test of Public Health Emergency Preparedness plan.Volunteers played the part of patients seeking medical care at a mass dispensing site at William Blount High School. The exercise tested the county's ability to distribute medications to the population in response to a potential emergency situation.

Emergency drill tests triage http://www.stjamesnews.com/articles/2008/07/01/news/news2.txt
It takes many years to make an emergency plan, but it takes just one day to figure out if that plan needs changing.On Thursday, June 19, Watonwan County Public Health and Emergency Services teamed up to execute a mock triage drill that simulated a disease outbreak or pandemic disease.Kristi Zellmann of the Public Health department said the drill went very well . “We have had this plan for a triage site, but we never set it up before. You always learn new things being in the actual environment.”.....