The revolution of warfare
San Diego-based SAIC is tackling part of the costliest,most complex modernization program in the Army's history
http://www.signonsandiego.com/news/military/20080629-9999-lz1b29warfare.html 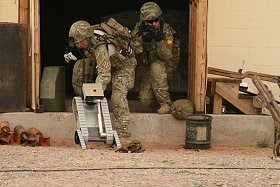 Soldiers in an experimental Army brigade at Fort Bliss, Texas, trained using a robotic tracked vehicle that is part of a $160 billion modernization program called Future Combat Systems. An earlier version of the unmanned ground vehicle is in use in Iraq.

WASHINGTON – Imagine a battlefield where soldiers, sensors, robots, vehicles and weapons are all linked in a high-speed wireless network, allowing the enemy to be seen, monitored and, if necessary, attacked from afar.
Such is the promise of Future Combat Systems, a $160 billion Army modernization effort in which San Diego-based SAIC is a key contractor.
FCS is the largest, most costly and complex modernization program in Army history. Proponents say it will revolutionize warfare, increasing the lethal force of U.S. troops while providing them with additional protection.
It's also a big deal for SAIC, which serves as co-manager of the program in its capacity as co-lead systems integrator with the much larger Boeing Corp.
SAIC will earn about $2.7 billion from its contract with the Army, marking the largest contract ever won by the company......


Secret bunker ready in case of terrorist attack (AU)
http://www.news.com.au/mercury/story/0,22884,23930442-922,00.html
THE Federal Government has built a $36 million top-secret communications office in a Canberra industrial estate.
If the capital suffered a serious terrorist attack, the new office would run the so-called Plan Mercator - which promises continuity of government.
Mercator, like similar plans across the world, provides for the evacuation of the Governor-General, Prime Minister, senior ministers and key advisers. .....

Japan, China, S. Korea plan flu outbreak drill
http://www.yomiuri.co.jp/dy/national/20080630TDY01305.htm
The government has decided to conduct its first joint drill with China and South Korea, possibly in October, to prepare against the possibility of an outbreak of new strains of influenza, according to sources.
Through the joint drill, the three countries hope to determine whether the sharing of information among them and their quarantine measures are satisfactory, using the results of the drill to establish new guidelines.
The Japanese government also plans to conduct joint drills with domestic medical institutions and local governments and to determine if these entities nationwide are fully prepared for a possible outbreak.
H5N1 avian influenza virus is said to have mutated into a new strain of influenza that can be passed on to humans. Many experts say such an outbreak would occur in Asia, where many people are reported to have been infected with the H5N1 virus. .....

U.S. to pay millions in lawsuit over anthrax innuendo
http://www.iht.com/articles/2008/06/29/america/hatfill.php

*The Anthrax "Ignorance"Most 9/11 researcher often ignore, that September 11th followed a very advanced timeline, but something also went wrong.It is now very clear, that a bio-nuclear threat WAS part of the original script of the September 11th attacks.Most possibly, a dirty bomb attack was put on hold, but an alleged "bio attack" took place.The drill for this scenario restarted at least on September 10th, was followed on September 11th, with an advise for the White House, to take Cipro and officially continued in New York, with the postponed bio drill "triPOD".What later became worldwide famous as the anthrax letters, was first professionally drilled in the June 2001 drill, "Dark Winter".Instead of Anthrax, Smallpox was the "pending threat".One of the co-organizer was ANSER Institute for Homeland Security.Few knew, that the "Homeland Security" did already exist 2 years before September 11th.Interestingly, the very same people, who later exploited the danger of "weapons of mass destruction", had been already part of the line-up of Dark Winter:R. James WoolseyJames Woolsey, former CIA director, former Titan Corporation (-> Project Trailblazer) and currently one of the board members of BoozAllen Hamilton.Woolsey is also one of the members of the neocon Project for New American Century (PNAC).In 2000, PNAC issued a report predicting that their proposed "transformation" of U.S. military and diplomatic policy in the Middle East wouldn't come very quickly, barring the occurrence of "some catastrophic and catalyzing event, like a new Pearl Harbor."9/11 was this "Pearl Harbour".Woolsey was also appointed as Fluor's board member in January 2004, while Fluor and a partner, AMEC Plc, were competing for two federal contracts to do reconstruction work in Iraq.
http://64.233.169.104/search?q=cache:l8WJo19nbDUJ:911review.org/inn.globalfreepress/lost_terror_drills_11b.html+dark+winter+antrax+drill&hl=en&ct=clnk&cd=6&gl=us
Posted by NXNGRG at 5:19 PM